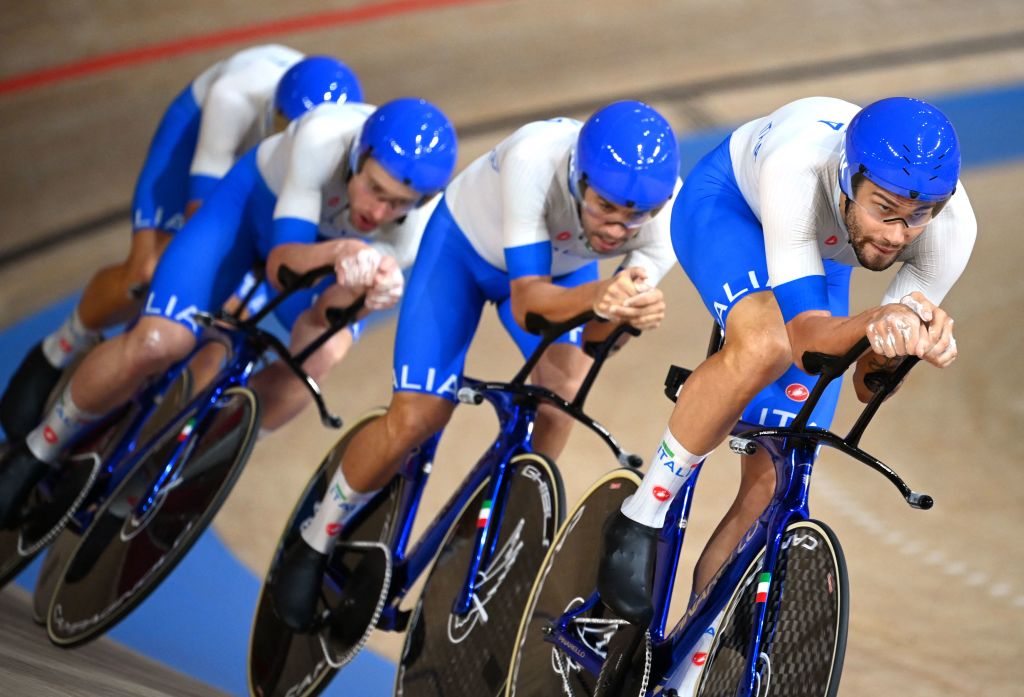 In a profoundly close and thrilling final of the men’s Team Pursuit in the Tokyo Olympics, Italy made a huge come-from-behind final 500m push to overtake Denmark and claim the gold medal. The ride was a culmination of perfect pacing, impeccable timing of the riders’ peak form and careful attention to aerodynamic details, Cyclingnews learns in a conversation with Xavier Disley, director of coaching and aerodynamics firm AeroCoach.

Over the three rounds across three days at the Izu Velodrome outside Tokyo, the men’s Team Pursuit had more than its fair share of drama, from Alex Porter of Australia breaking his handlebars during qualifying, the crash between Denmark’s Frederik Rodenberg and Great Britain’s Charlie Tanfield in round 1 and the controversy over Denmark’s use of kinesiology tape on their shins in qualifying.

It was no surprise then that Italy’s winning margin with riders Filippo Ganna, Francesco Lamon, Jonathan Milan and Simone Consonni turned around a deficit of 867 milliseconds with 1000 metres to go to best Lasse Norman Hansen, Niklas Larsen, Frederik Rodenberg and Rasmus Pedersen and win by just 171 milliseconds – not much more than a blink of the eye.

Disley says the fact that Denmark was barred from using the kinesiology tape in the final rounds could have been one of the many tiny factors that led to their agonising loss.

“One of the first things we at AeroCoach was to sell strips of k-tape to time triallists in the UK crowd [for non-UCI events, ed.],” Disley explained. “The rider’s body is 80 per cent of the [aerodynamic] drag. The leg is [exposed to the wind] and is not a very aerodynamic shape. Anything you can do to make it more aerodynamic would be an advantage.

“I calculated that the difference [between Italy and Denmark in the final] was less than 1.5 watts – so if [using the tape] was faster it would have made a bit of a difference.”

Both Italy and Denmark “had great setups”, Disley said.

“From the riders’ position to the bikes, everything was very nice. The Danes didn’t have aerodynamic cranks,” Disley added, explaining that the spider on the cranks that Denmark used had holes whereas Italy’s inexpensive Miche Pistard Air crank arms had all the gaps plugged.

“That definitely would have been an aero penalty – maybe [Denmark] chose them for stiffness.”

Disley noted other small differences between the two teams’ equipment, including Denmark’s aero helmets being different for each rider to match their body shape while Italy’s helmets were all the same.

“Both teams had the same wheels [Campagnolo Ghibli carbon fibre disc wheels], with tire-matching, using 19mm front and 23mm rear tires, and custom aero-bar extensions. You can pick holes in what the riders used but in the end, did they win? Both were incredibly optimised.”

Unlike years past, where teams could show up at the Olympics with brand new technology, the UCI rules for the past several Games have required all equipment to be commercially available, so that has limited the size of the role that gear selections can have. Great Britain invested heavily in the Lotus x Hope HB.T bikes in the years leading up to Tokyo, but Disley said the rules made sure there was no “massive new splash”.

In the end, Italy’s performance mainly came down to pacing and the exquisite use of the powerful engine of Ganna and the balanced strengths of his teammates.

Lamon was the first rider off and brought the team up to a high speed, while Denmark didn’t go out as fast in the final as they had in previous rounds. When it came to the closing 500m, Ganna turned a nearly half-second deficit into a victory.

“The Danish rider [Rodenberg Madsen] was on the front with Ganna but he wasn’t as fast. He dropped the pace 1.5 kilometres per hour. The margin was so tiny.”

In contrast, Italy held back Ganna, “who is so strong, he usually negative-splits the individual pursuit”, keeping his pulls relatively short until one final push in the last laps.

“In the first round, Ganna hit the front with 500m to go, in qualifying it was half a lap earlier.” In the final, it made the difference by delivering him to the front at just the right moment.

“I really enjoyed watching the team pursuits,” Disley said. “In the early rounds, there were a lot of blow-ups, riders getting dropped or pulling out of the line. It seems to be the better-drilled teams had the advantage.”

The sharp, steep turns of the Izu Velodrome likely took some adjustment for teams, he says. “By the final, it got better. Both teams were technically quite good – Italy had no weak links.”

The Tokyo Olympics Team Pursuit – both for men and women – showed that records can still be broken even with years of optimization in terms of athlete training, timing peak form, recovery and nutrition. The Italians knocked 2.64 seconds off Denmark’s record from Worlds in 2020. Between qualifying and finals for the women, Germany knocked 6.006 seconds off Great Britain’s mark from Rio.

“Riders have been strong for ages,” Disley says. “Training, peaking – all that is important but there’s nothing like aerodynamics. It’s a consistent improvement.”

A super close race for the mens team pursuit final #Tokyo2020 #Olympics as ITA overhaul DEN with just half a lap remaining. A huge final turn from @GannaFilippo took ITA to a new 4km world record of 3:42.032 with a 0.166sec advantage, the equivalent of just 1.47w at 65kph. pic.twitter.com/w7FEZ5psnqAugust 4, 2021