These are the Olympic Games that keep on giving. Less than 24 hours after Karsten Warholm smashed the world record for 400m hurdles, Sydney McLaughlin matched his feat in the women’s event.

On a warm Wednesday morning in Tokyo the American clocked 51.46 to beat the 51.90 world record she set at the US Olympic Team Trials in Eugene in June.

In similar fashion to the men’s Olympic final, this was not a one athlete show either. Fellow American Dalilah Muhammad, the reigning Olympic champion and former world record-holder, ran McLaughlin close and clocked a PB of 51.58 – inside the old world record – for the silver medal.

In third, Femke Bol set a European record of 52.03. In fourth was Janieve Russell of Jamaica with a PB of 53.08 as Anna Ryzhykova of Ukraine was fifth in 53.48.

Muhammad, who was racing blind in lane seven, went off fastest and held a lead at halfway. Bol in lane five and McLaughlin in lane four had her in their sights though and did not let her get too far ahead as they coolly tried to run her down.

Rounding the bend into the home straight there was all to play for and McLaughlin maintained her form best as she edged past Muhammad as Bol began to tire and lost ground. 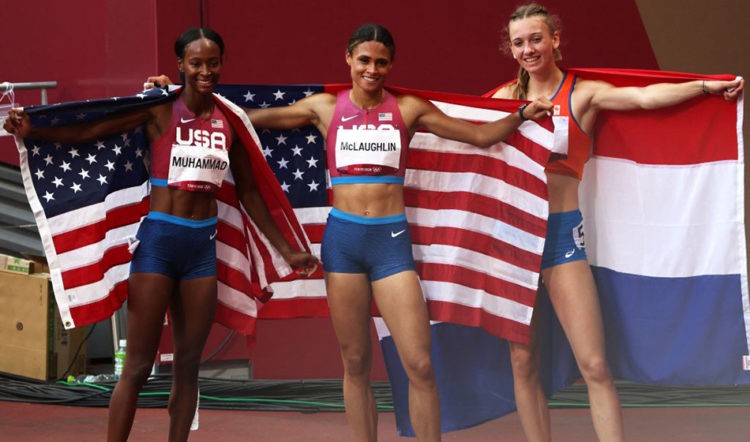 McLaughlin, who turns 22 on Saturday, was the odds on favourite to win but this was a keenly anticipated race with one betting firm having the winner as 1/3 before the race followed by Bol at 3/1 and Muhammad at 11/2.

“I’m absolutely delighted. What a great race,” said McLaughlin. “I’m just grateful to be out here celebrating that extraordinary race and representing my country.

“I saw (silver medallist) Dalilah ahead of me with one to go. I just thought ‘run your race’.

“The race doesn’t really start until hurdle seven. I just wanted to go out there and give it everything I had.

McLaughlin will leave Tokyo as Olympic champion but, as with the men’s race, we can expect many more clashes between these athletes in coming years, starting with next year’s World Championships in Oregon.

Such is the quality of the event right now, Bol’s time in third would have been a world record itself only two months ago.