The world leader and two-time world silver medallist Pedro Pichardo finally won the big one as he dominated the triple jump with the three longest jumps as Portugal won their second title in four Games following Nelson Evora’s win in 2004.

The former Cuban started in great form with a pair of 17.61m efforts in the opening two rounds to immediately make a mark on his rivals.

Yaming Zhu jumped a PB 17.41/1.3 in the second round. However the Chinese athlete’s mark was surpassed shortly after by Yasser Mohamed Triki’s Algerian record of 17.42/1.0.

In the third round Will Claye, who has won seven global outdoor medals without winning gold, brought himself into medal contention with a 17.44/0.4 to go second. However that did not last the round, as world indoor record-holder Hugues Fabrice Zango moved up to second with a 17.47m jump after being out of the qualifying positions until that leap.

Before the round was over, though, Pichardo seemed to effectively end the contest as he jumped a Portuguese record 17.98/0.0. Note he did however jump 18.08m as a Cuban in 2015.

After his stunning start, Pichardo could go on holiday for the last three rounds and he fouled his fourth and sixth round effort and passed the fifth as he won gold with much to spare.

His best jump consisted of a 6.48m hop, a 5.34m step and a 6.16m jump as his speed was recorded as 36.4kph which was surprisingly slower than all the other leading jumpers.

The major change over the last three rounds was Yaming Zhu sailing out to 17.57/1.7 to move Zango down to third and Claye to fourth.

Zango, who jumped 17.43m in the final round, did have the consolation of taking Burkino Faso’s first ever athletics medal in any event.

It was close though as Triki scared the medallists in the the fifth round improving his Algerian record to 17.43/1.0 but he fell just four centimetres short.

Warner on target for Olympic record

Canadian Damian Warner maintained his dominance in the first two events of the second day – the hurdles and the discus.

The Rio bronze medallist and overnight leader carried on his good form from Tuesday with an Olympic record 13.46 in the 110m hurdles despite a 1.0m/sec headwind to stay on course for the overall Olympic decathlon record at the very least. 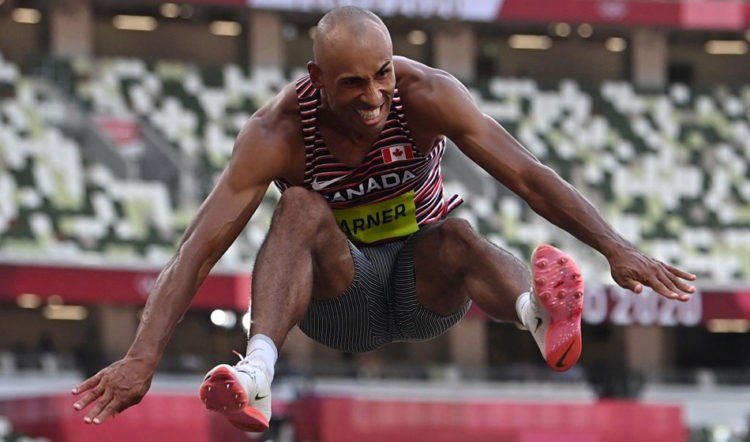 Grenada’s Commonwealth champion Lindon Victor had the best throw of 49.75m and he moved from 11th to sixth and 6028 points.