PH duo fails to achieve floor, even with Saso firing a 68

KAWAGOE, JAPAN—Two more days—and that is if the women’s golf tournament of the Tokyo 2020 Olympics still has that many to play—is what Bianca Pagdanganan and Yuka Saso have to turn the tide and book a podium finish via the backdoor after failing to gain ground on the front-runners on Thursday.

With contrasting second round efforts, the Filipino duo fell way off medal contention, and if the bad weather forecast for Saturday does happen, then Pagdanganan and Saso will have just the third round on Friday to make their moves.

Pagdanganan salvaged a bogey from the most difficult part of the 18th green, while Saso converted a superb approach into a six-foot birdie on the same hole to finish with an even-par 71 and a 68, respectively, that kept them mathematically in the fight for a medal. 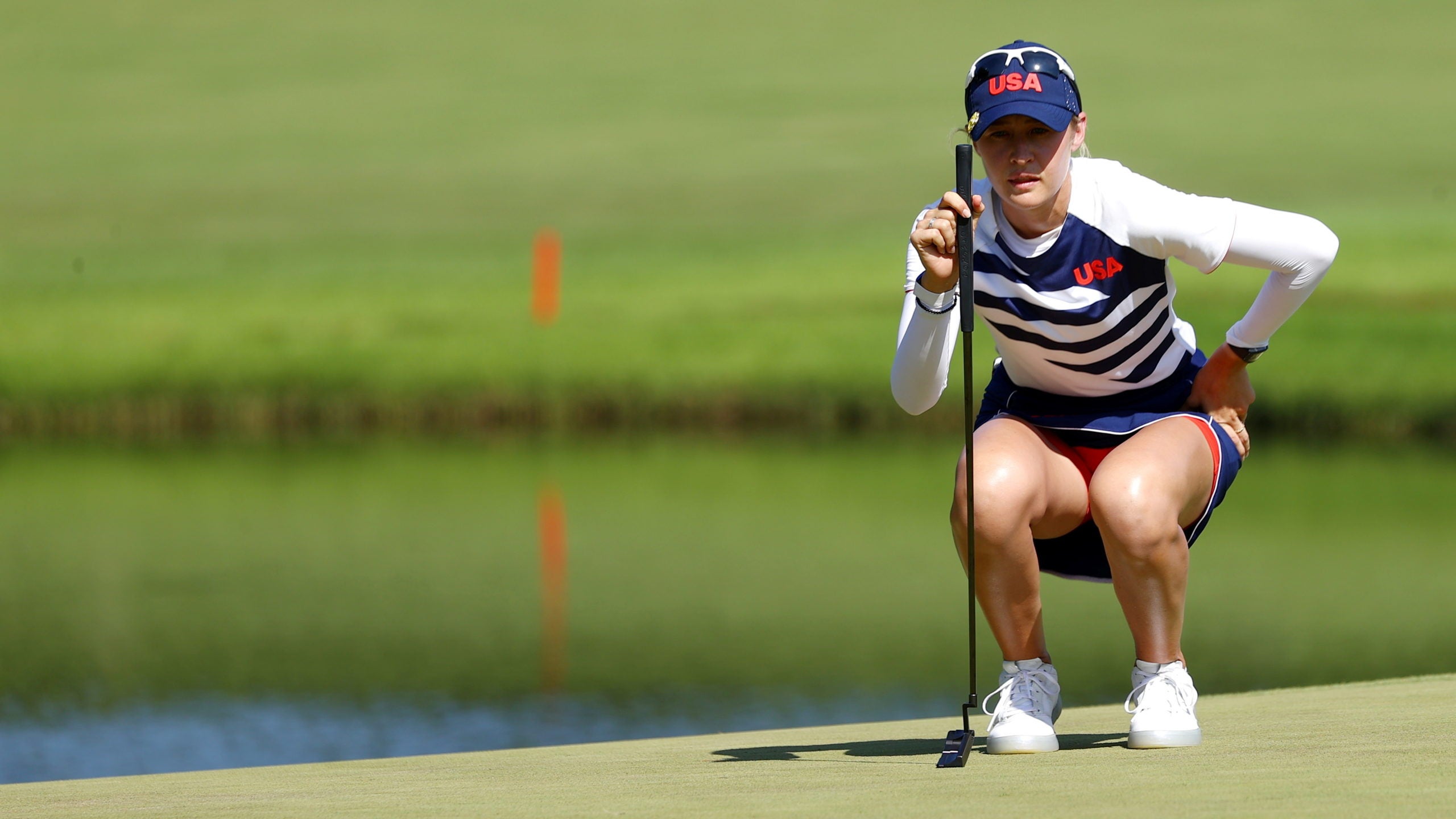 Nelly Korda, here studying her line of putt, flirted with a 59. —REUTERS

After shooting an opening 69, Pagdanganan dropped to a share of 27th place at 140, and although Saso broke par, the Women’s US Open champion climbed to a tie for 34th, but 13 shots behind the blistering pace set by world No. 1 Nelly Korda of the United States.

Korda lit up the Kasumigaseki Country Club with a 62 and zoomed to a four-shot lead over the Danish duo of Nanna Koerstz Madsen (64) and Emily Kristine Pedersen (63), and the longshot from Indian Aditi Ashok (66), despite holing out with a sloppy double bogey 6.

Saso said she was able to read her putts better than the first round and “can hopefully keep this going the last couple of days.”

Despite her second round frustrations, Pagdanganan is looking forward to the medal chase.

“It wasn’t the round I wasn’t hoping for,” Pagdanganan said. “There were so many low scores today, I was hoping to possibly go low and give myself a push up the leaderboard but I wasn’t able to get things to click today.”

Pagdanganan averted a possible disaster on the treacherous last hole when she escaped with a bogey after driving into a perfect stymie, played out and sent her third shot into the most difficult side of the green. But she rolled the tough downhill putt from nearly 40 feet close to the cup.

With the temperature topping 30 degrees Celsius, Korda flirted with the magical 59 after nine birdies and an eagle heading up the 18th.

She needed one more birdie to join Annika Sorenstam in the record books on 59, 20 years after the Swedish great’s groundbreaking day in Phoenix, Arizona.

“I think when people ask me if I prepare more or put more meaning than normal [into] majors or Olympics or whatever, I say, ‘no,’ because I go into any type of an event with the same demeanor and the same goal,” Korda, who has a 129 aggregate, told reporters.

Sweden’s overnight leader Madelene Sagstrom (68) was fifth at 134, while Japan’s Mone Inami was a stroke further back after a 65.

An approaching tropical storm forecast to hit on Saturday prompted organizers to consider cutting the event to 54 holes.

“We continue to track the tropical storm which is expected to affect our area beginning Saturday through Sunday,” the International Golf Federation said in a statement.

“If we are unable to start or complete 72 holes, the Women’s Olympic golf Competition will revert to a 54-hole event,” the federation said. —With a report from Reuters