Uganda won silver and bronze in the men’s 10,000m and they completed the medal set with a shock gold in the women’s 3000m steeplechase – a cracking race which saw Lizzie Bird smash her UK record after becoming her country’s first ever female steeplechase finalist.

Finishing eighth in the Diamond League at Doha and fifth at Hengelo earlier this season, you could have been given long odds on Peruth Chemutai winning gold. She was a fighting fifth in the 2019 World Championships but failed to negotiate the heats in the Rio Olympics and 2017 World Championships in London.

Pre-race all eyes were on world leader and 2015 world champion Hyvin Kiyeng, European champion Gesa Krause, world record-holder Beatrice Chepkoech, former world champion Emma Coburn and  Winfred Yavi, a 9:02.64 performer this year, but only one of these five ultimately made the top four.

The 2017 World Championships runner-up was second in the US trials to Coburn and was ahead at 1600m (4:55.3 after a 72.7 fourth circuit) as the pace began to crank up even further.

Frerichs opened the gap to almost two seconds but gradually the pace was catching up with her and she reached the bell in 7:50.7, around 10 metres up on a gradually closing Chemutai (7:52.0). Kiyeng (7:54.5) was now well clear of a fading Yavi (7:57.5) as the medals looked to have been decided. The only question now seemed to surround which podium slots the athletes would fill.

However, the American was clearly out on her feet and she lost the lead down the back straight. She was unable to put up much of a fight as the Ugandan completed her last lap in 69.5 for a national record 9:01.45.

Frerichs did briefly look in danger of being caught by the next group but she rallied in the straight to win a well deserved silver in 9:04.79, although her last circuit was a painful 74.1.

Kiyeng closed within a few metres to take third and finish one position lower than in Rio in 9:05.39 but two bronzes from two Olympic steeplechases in Tokyo will be seen as a total disaster in Kenya.

Ethiopia’s 20-year-old prospect Mekides Abebe ran a 67.9 last lap to move up from sixth to fourth in 9:06.16 which left her around five metres short of a medal.

There was then a big gap to Krause (9:14.00) with Mismas-Zrimsek setting a Slovenian record 9:14.85 despite a painful 76.2 final circuit and she finished ahead of a very disappointing world champion Chepkoech (9:16.33). Coburn also gave up, probably in the knowledge that she was already disqualified for a lane infringement. 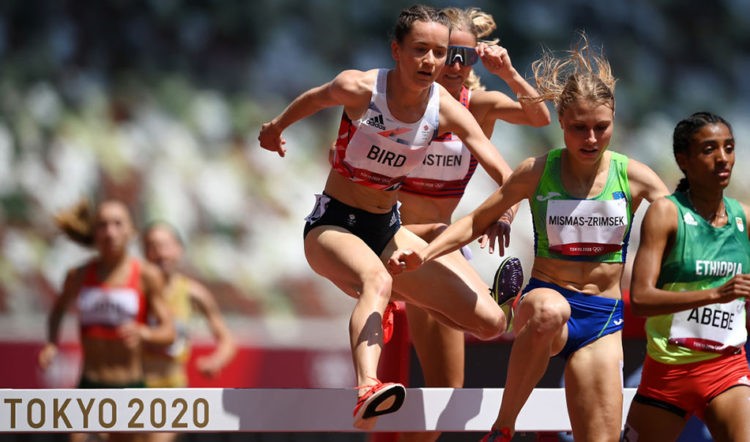 She said: “I’m happy with that. I think I had to reset after making the final as that was my main goal and I chatted with my coach and we thought on a good day sixth to tenth would be a really good result, so I was just trying to race the best I could.

“My legs felt pretty tired after the heat, so it felt a bit tougher than I was maybe expecting it to, but I’m happy with that. I would have liked to have had a little bit more in me for the last couple of laps and been a few places higher, but I guess that’s how it is – never quite satisfied.

“I just love the event. I’ve been doing it now for five, six years, I think it’s a really fun event and I really hope that by being the first British woman in a final there are some girls watching who think ‘I want to try the steeplechase’, because it’s a cool event, it’s still fairly young and it’s a really good mix of endurance and technique.

“I’m going to go back to Boulder now and I’d really like to take advantage of my fitness right now and do some 1500s, maybe road miles, an 800m or something fun and then hopefully the Diamond Leagues.”