Spread the love
HomeOlympicOne down, two to go for Sifan Hassan
Olympic

One down, two to go for Sifan Hassan

When Sifan Hassan fell heavily at the start of the last lap of her 1500m heat on Monday morning, her three-way Olympic plan looked shaky. Yet she got up and still won that race before then cruising to an easy victory in the 5000m final later that evening.

Racing with her leg strapped up, the race itself was hugely disappointing in many ways but the finish was truly historic.

In the knowledge that Hassan had run a hard 1500m earlier in the day, had hit the deck in the process and possesses a stunning kick, you would have thought her rivals might have attempted to put her under pressure. They didn’t.

World champion Hellen Obiri went to the front and showed some sort of urgency but there was no real acceleration as the fourth kilometre was reached in 11:57.09.

The pace then picked up a little with laps of 69.3 and 68.1 up to the bell as the race came down to seven contenders – Hassan and two Kenyans, three Ethiopians and Turkey’s Yasemin Can – before five opened up a small margin as they entered the last circuit. 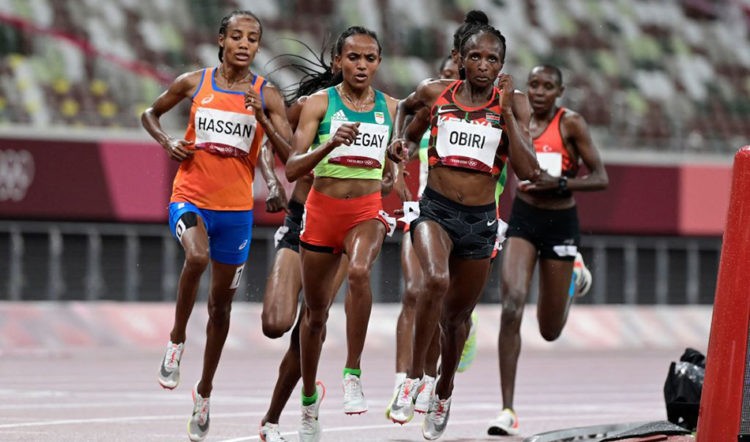 Obiri accelerated slightly on the penultimate bend, covering it in 15.4 but Hassan did likewise as she moved up to third before unleashing a stunning long drive for home. Covering the next 100m in 14.0 she opened up a metre on Obiri, who ran 14.4, which Tsegay matched a metre down on the Kenyan as Tirop and Taye began to lose ground.

Any doubts that the 1500m may have taken something out of Hassan were dispelled completely as she covered the last bend in an incredible 13.7, with Obiri now three metres back after a 13.9 and over five metres now to Tsegay.

As they hit the final straight, Obiri made a huge effort to close but Hassan went away further and the Kenyan clearly settled for her second Olympic silver, with Tsegay comfortably holding on to bronze.

Obiri ran her last lap in 58.9 and Tsegay 59.4, which was faster than anyone had previously managed in an Olympic final but left them totally outclassed.

“I can’t believe it,” said Hassan. “I used all my energy this morning and I was kind of tired. I couldn’t believe what happened. It was terrible when I tripped. I felt terrible afterwards and I never thought I was going to be Olympic champion.

“It has been an amazing day. When I fell down and had to jump up I felt like I was using so much energy. I couldn’t believe the feelings in my legs. All the energy seemed to leave me.

“Before the race here I didn’t even care. I was so tired. Without coffee I would never be Olympic champion. I needed all the caffeine. I was so scared I wasn’t going to do it.”

Little Jav on the Prairie, by Mike Fanelli, used with permission