Heptathlon often boils down to survival of the fittest. World champion Katarina Johnson-Thompson’s hopes crumbled in Tokyo when her calf gave out on her during the 200m. Nafi Thiam has also endured injuries in the last couple of years but her body held together to capture gold with 6791 points.

In successfully defending her title, Thiam created history too. Until now Jackie Joyner-Kersee is the only heptathlete to win more than one Olympic title – with victories at the 1988 and 1992 Games – but now Thiam has emulated that feat.

The 26-year-old from Belgium broke down in tears after the last event, the 800m, as the size of her achievement sank in. “It feels so good. I can’t believe it. I am so emotional I can’t describe it,” she said.

Anouk Vetter of the Netherlands won silver with 6689 while her Dutch team-mate Emma Oosterwegel earned bronze with 6590 as they won their country’s first ever Olympic medals in this event.

Thiam will share the headlines in Belgium with the nation’s men’s hockey team, who won gold on the same day. To earn the title she put together a solid series of performances that started on Wednesday with 13.54 for 100m hurdles, 1.92m for the high jump, 14.82m in the shot put and 24.90 in the 200m.

On Thursday she began with 6.60m in the long jump and then 54.68m in the javelin as she battled with Vetter for the title. The gold was still up for grabs in the final event but Vetter was unable to challenge Thiam and clocked 2:18.72 to the Belgian’s 2:15.98. 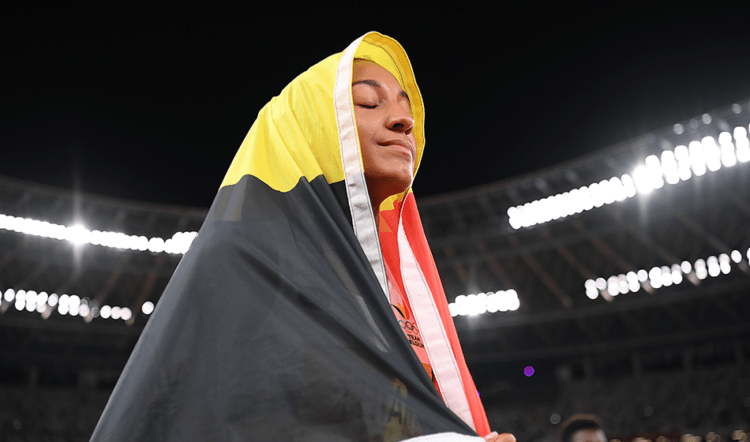 “The first day was difficult for me,” said Thiam. “So on day two I had to really focus. I knew I had to do something really good in the long jump and javelin.

“My coach was so positive and told me he believed in me. I am really happy I was able to go through that and put my performances together.

“In the 800m I was hoping to do a bit better but I think it was a really positive race and in the end I got the medal. I am so happy.”

The hope now is that Johnson-Thompson can recover from injuries ahead of a clash with Thiam at next year’s World Championships in Oregon. On Thursday she released a statement which went into her recent problems in more detail, saying: “Only a handful of people understand what I’ve been through.

“Even a smaller amount understand the mental and physical challenges I’ve faced trying to make it back in time through a pandemic after my Achilles ruptured the back end of December.

“I started the year in a wheelchair and I was not willing to end my Olympic campaign the same way.

“To make it to the line was a miracle. To not only do that, but to be on my way to putting a decent score together, is heart-breaking. I truly believed I was capable of wining a medal despite having up to half a year of missed training.

“More than ever, I am proud that I showed up, put myself out there and tried. It would have been very easy to shy away and pull out, to say I wasn’t ready and blame the injury but I’m not that type of athlete or person. I am a fighter, I’m gritty AF and I find it extremely hard to give up. I can rest easy knowing I applied myself every single day and pushed until I couldn’t push anymore.

“I’ve sacrificed so much, moving my entire life to France five years ago away from my family and friends. I’ve lost heart knowing that the work my team and I have done for the last eight months was for this outcome and I hate that my story has played out in more heartbreak.

“I’ve been knocked so many times and got back up, but it will take a lot of time for me to process this reality.”