Heavy rain played havoc with the qualifying heats and rounds with the women’s pole vault delayed until the wet weather blew over. But there was plenty of track action with Elaine Thompson-Herah leading the qualifiers in the women’s 200m for Tuesday night’s final.

The Jamaican, who won the 100m title on Sunday, equalled her PB with 21.66 (0.3) as she beat the 18-year-old Namibian Christine Mboma who, as in her heat earlier in the day, came past US champion Gabby Thomas in the final strides.

In such a stacked semi-final, Britain’s Beth Dobbin was fifth in 22.85. “I would have liked a bit quicker after my heat felt really controlled and comfortable,” she said. “When I came off the bend my legs felt a bit heavy so I don’t know if it’s the two rounds in one day that I’m not quite used to.” 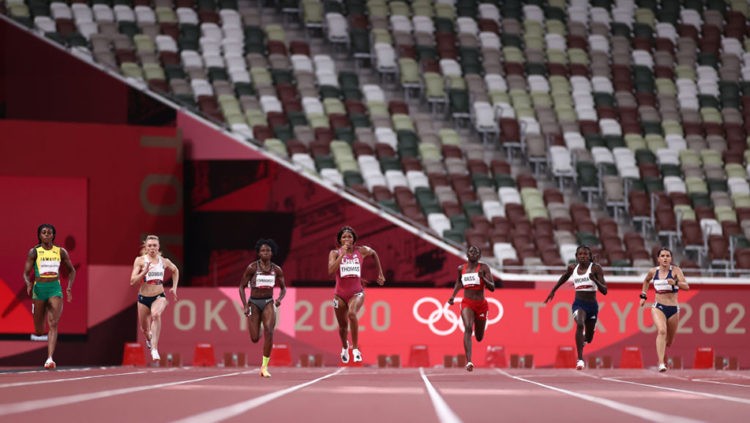 Marie-Josée Ta Lou of the Ivory Coast was the next quickest as she ran 22.11 (0.1) to win her heat from Shaunae Miller-Uibo’s 22.14. In third, Mujinga Kambundji equalled the Swiss record with 22.26 to qualify for the final.

Jamaican Shelly-Ann Fraser-Pryce won the slowest heat in 22.13 (0.3) from another Namibian teenager, Beatrice Masilingi, who ran 22.40.

Mboma and Masilingi specialise in 400m but had to run 200m at these Games due to their naturally elevated testosterone levels.

The big three in the women’s 400m hurdles of Sydney McLaughlin, Dalilah Muhammad and Femke Bol all negotiated their semi-finals in style despite rain hammering down in the stadium.

Muhammad, the reigning champion, won the first race in 53.30 from Janieve Russell of Jamaica. World record-holder McLaughlin also qualified at a canter with 53.03 as Gianna Woodruff set a Panama record of 54.22 in second and Anna Ryzhykova of Ukraine qualified for the final as a fast loser with 54.23 in third.

Then came Bol and the Dutch athlete also looked relaxed as she eased through the finish line on an increasingly greasy track in 53.91. Behind, Anna Cockrell of the United States ran 54.17 and third-placed Viktoriya Tkachuk of Ukraine got the final fastest loser spot with 54.25.

Struggling in the wet conditions and battling with an inflamed Achilles tendon, Britain’s Jess Turner was seventh in 60.36. “It was horrendous – it is probably the worst rain I have ever ran in,” she said.

On her Achilles problem, she added: “It was too painful, limping over the finish line wasn’t how it wanted it to end. But I just couldn’t run through it. I was thinking adrenaline would kick in, but I just couldn’t.”

With 43.88 Kirani James was fastest qualifier in the men’s 400m semi-finals. Showing a return to the kind of form that brought him the 2012 Olympic title, the Grenada athlete, who is now aged 28, beat Anthony Zambrano in his semi – the Colombian running 43.98.

They were the only runners to break 44 seconds but world champion Steven Gardiner looked relaxed as he cruised to victory in his semi in 44.14. The Bahamas athlete was casually attired in a t-shirt and he beat a stacked field that included runner-up Michael Norman of the United States (44.52) and Isaac Makwala of Botswana (44.59). 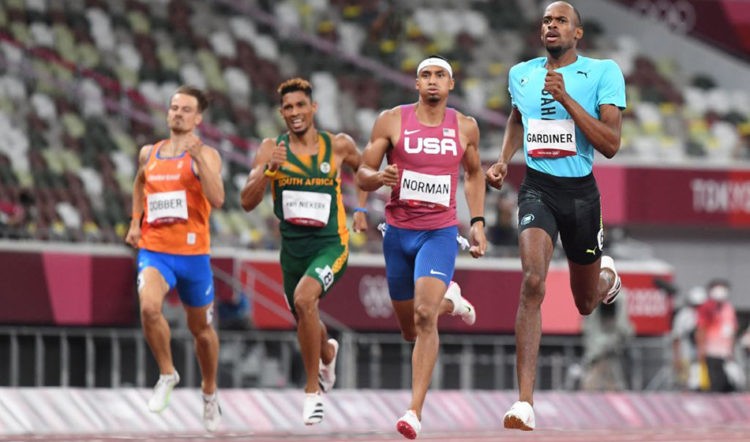 Olympic champion and world record-holder Wayde van Niekerk was also Gardiner’s race but was straining to stay in touch with the leaders entering the final straight and he wound up fifth in 45.14, which means the South African won’t run in Thursday night’s final.

Michael Cherry of the United States was the other heat winner with 44.44 from Christopher Taylor of Jamaica, who ran 44.92.

Sandi Morris out of pole vault

After rain delayed the women’s pole vault qualifying, when it eventually got going most of the medal favourites progressed although world indoor champion Sandi Morris of the United States exited after her pole snapped on an early attempt and then she appeared to be injured as she cleared a best of 4.40m.

Those progressing to the final on Thursday evening included Holly Bradshaw of Britain, Katie Nageotte of the United States, Olympic champion Katerina Stefanidi of Greece and world champion Anzhelika Sidorova of Russia – all clearing 4.55m.

Bradshaw needed just one attempt too. “It was a dreamy way to qualify,” she said. “Just one jump and save energy.”

On the wet weather, she said: “It was the worst conditions I’ve ever had. It was just a matter of staying focused.”