Massimo Stano has claimed Italy’s third track and field gold of the Tokyo Games, winning the men’s 20km race walk in 1:21:05 ahead of Japan’s Koki Ikeda and Toshikazu Yamanishi.

A sparse Japanese crowd braved the stifling temperatures and humidity levels but could only watch on in heartbreak as the Italian police officer roared over the line ahead of their home favourites.

The competition had come to life at the one hour mark as a breakaway of seven athletes sped away from the pack. Stano, Ikeda and pre-race favourite Yamanishi were accompanied by two Spanish walkers and two Chinese – and it soon became obvious that it was from this group that the medallists would emerge.

He was a lone Italian in the pack, but Stano was supported by countryman Francesco Fortunato, who cheered on his compatriot as he lapped him.

Having put distance between himself and the two Japanese athletes, Stano came over the line, arms aloft. He remained sporting in victory, waiting for his rivals at the finish line to congratulate the duo with whom he had spent most of the race.

Victory for Stano makes him the third Italian to win the 20km walk event after Maurizio Damilano in Moscow in 1980 and Ivano Brugnetti on home soil at Athens 2004.

Britain’s Callum Wilkinson finished in a respectable 10th place crossing the line in 1:22:38, while team-mate Tom Bosworth finished 25th in 1:25:57. 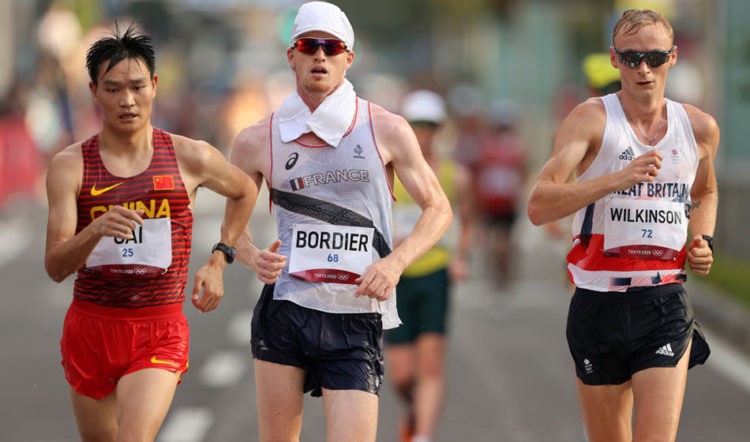 “It was brutal conditions,” said Wilkinson. “The athletes went off at a phenomenal pace after about 2km and I just held back a little bit, as it was too fast.

“My coach said trust your instincts and I did and I was right they came back to me. I was moving up the field, finishing fast and moving up places and I just needed to get myself to 15km. I knew with 2km to go there was a Mexican and Swede in front of me, who I would love to have beaten as on his form this year he was one of the guys to beat, but I couldn’t quite catch him.

“I managed to out-sprint the Mexican in a race walk for 10th place. It is a great result for me going in, well above my season’s best and where I was world ranked and is a big step in the right direction.

“For me, in 2012 I started walking. Four years later I won the World Junior Championship and what would have been four years later and is now five, I have made the Olympics and come 10th  and I am over the moon.”

Bosworth, who was sixth in the Rio Olympics, said: “I just felt flat from the off. Sometimes you just know when you are going to have an off day, but even though it has been a rushed build up because of the hamstring problems, I felt ready to go and really strong on the start line.”

He added: “I never got into the race. I never felt like I had any turn of speed. I was stuck in one gear and that was really disappointing. I think it is probably my worst performance in a British vest, which is hugely disappointing.”