Surely this race was the most amazing race in the history of athletics?

This event has long been shaping up the race of the Tokyo Games and there were even some people who were slightly disappointed when Karsten Warholm smashed Kevin Young’s long-standing world record with 46.70 in Oslo last month as it was potentially going to take something away from the Olympic final.

Yet they need not have worried.

The hugely talented Rai Benjamin produced one of the greatest performances ever seen as he obliterated the Norwegian’s record with 46.17 but unfortunately he was two metres adrift of Warholm’s space-age 45.94 and his run was only good enough for silver.

Warholm started fast and clearly had an advantage down the back straight, hitting the fifth hurdle in 20 seconds.

Gradually Benjamin closed the gap and as Warholm hit the 300m mark in around 33 seconds, Benjamin was easing on to his shoulder.

The race still looked on as they approached the last hurdle but Warholm took it perfectly in his stride and finished full of running and the American was unable to get on terms despite his stunning US record.

Warholm celebrated wildly and even half a hour later admitted: “It hasn’t sunk in. It’s a great moment. I can’t believe the time. I had been thinking about the perfect race and this was close.”

The Norwegian added: “It’s very special to me. It’s just crazy. My coach said a 45 something is possible. To do it is something else. My respect to competitors. To run 46.17 and only get silver.

“I put my whole soul into it. It was the only thing missing from my collection. I think of my coach. He is my best friend and always there every day when he should be have a good life retired.” 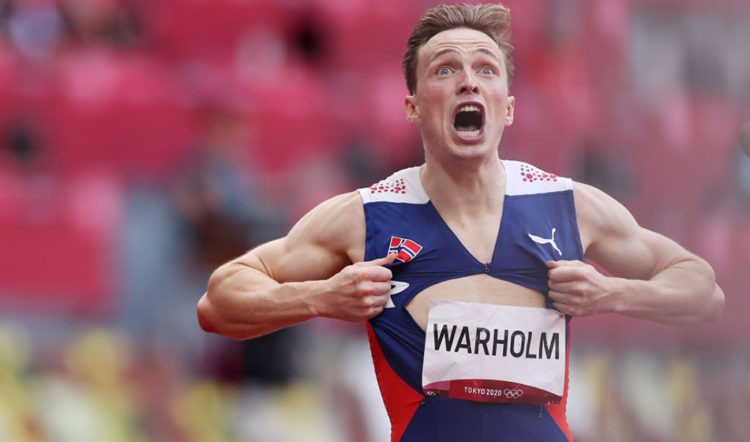 A stunned Benjamin said: “It’s hard I trained my butt off all this year and I made a mistake. I’m proud and there was a lot of pressure. I’m now going to focus on the 4×400.”

Alison dos Santos of Brazil was a distant third but only just missed Warholm’s previous record with 46.72 to go third all-time with his South American record.

Kyron McMaster improved his British Virgin Islands record with a Commonwealth record 47.08 to go seventh all-time just ahead of Abderrahman Samba’s 47.12 which netted him a mere fifth in the greatest race of all-time.

Yasmani Copello equalled his Turkish record with 47.81 in sixth while Rasmus Magi set an Estonian record of 48.11 in seventh to make it six records in the same race.

Anyika Onuora on residing with racism

Run by Girls, #6: Anna Cockrell preventing for psychological well being care By Sam Fariss for RunBlogRun