Jerónimo Cycles is effectively moving away from full custom to open up their bikes to a broader audience, shifting more to stock bike offerings in a pared-down bike lineup. Just three different frames/framesets will be offered – two available now – each in either premium steel or titanium, including an upcoming road bike, the Sfarrapa gravel bike & Txabardo trail hardtail mountain bike.

Now it looks like he is simplifying Jeronimo Cycles with a less-is-more philosophy around one bike frame per discipline. Each bike is based on Jeronimo’s refined geometry, available in either Reynolds 853 steel or 3/2.5 ti, with the titanium bikes still offering an affordable option for custom geometry, if needed. 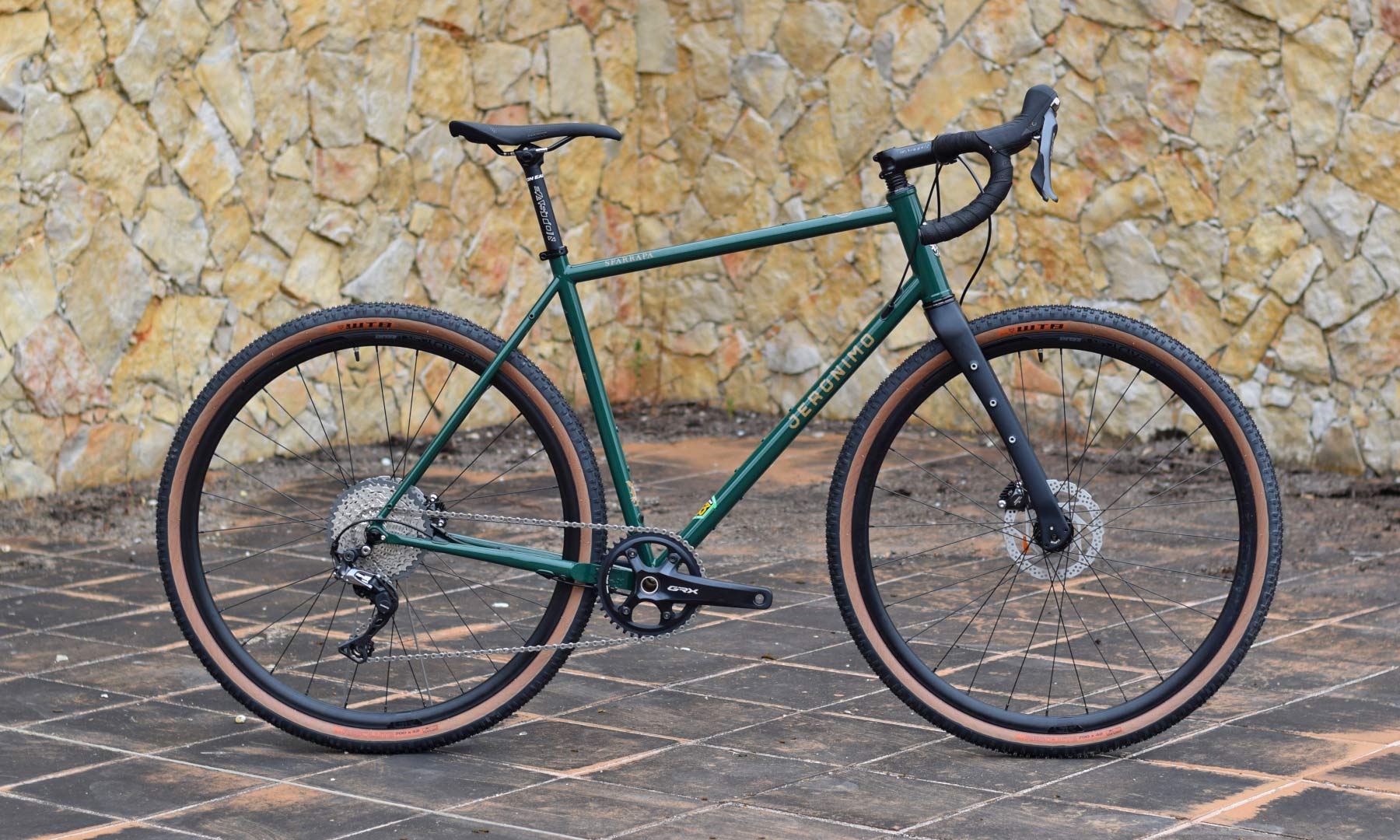 The first of the new bikes is an all-new Jeronimo Sfarrapa gravel bike – named for a well-known Portuguese smuggler who knew every hidden track. Developed as a light steel mixed-surface bike for long-distance adventure rides and bikepacking, 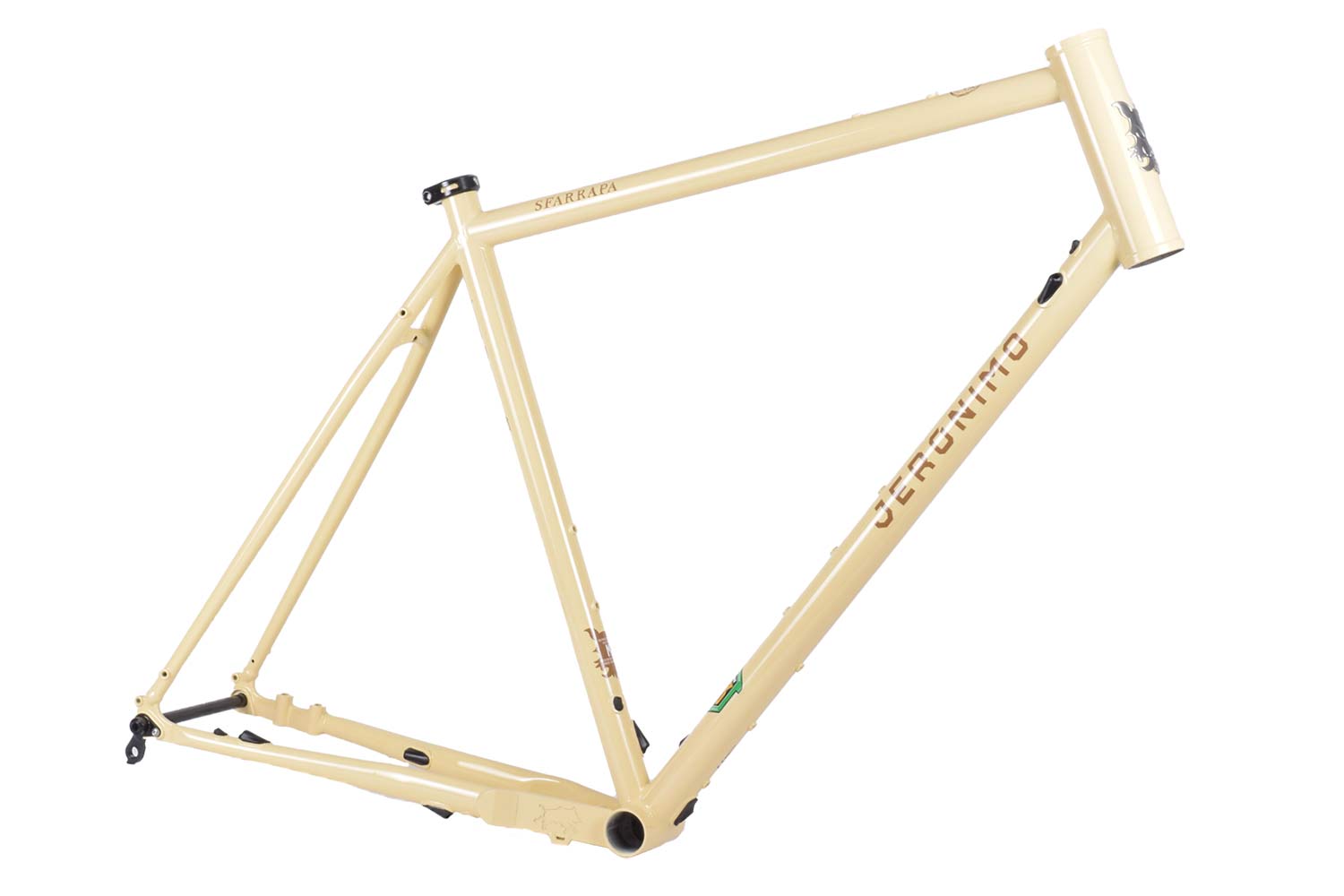 The gravel frame is welded in Taiwan from premium double-butted Reynolds 853 tubing with a straight 44mm headtube and BSA threaded bottom bracket, for a claimed weight of 2456g (M/L). 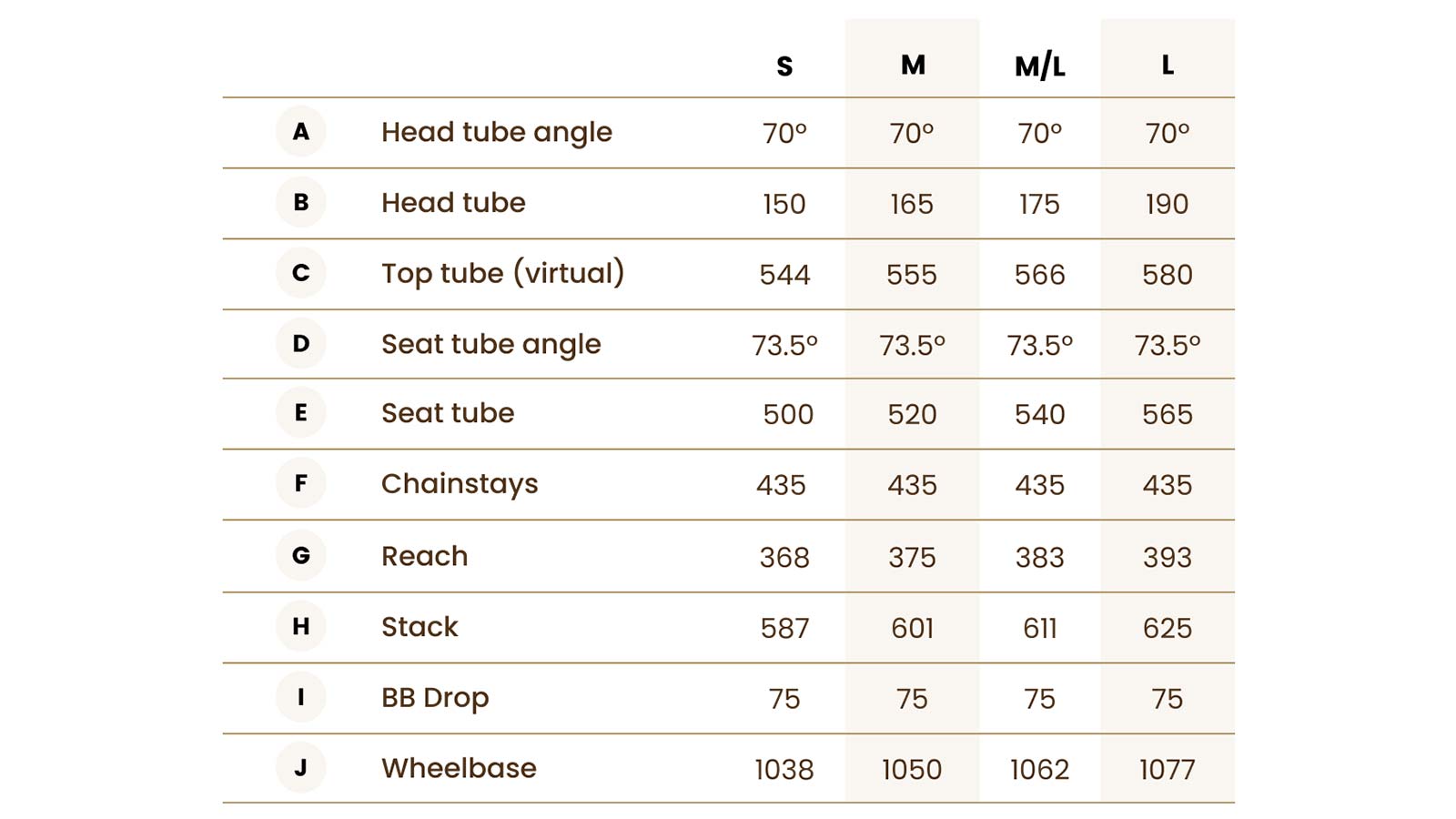 Geometry for the bike is meant to be versatile, whether loaded down or not, developed together with a 400mm a-c, 52mm offset full carbon tapered steerer fork. 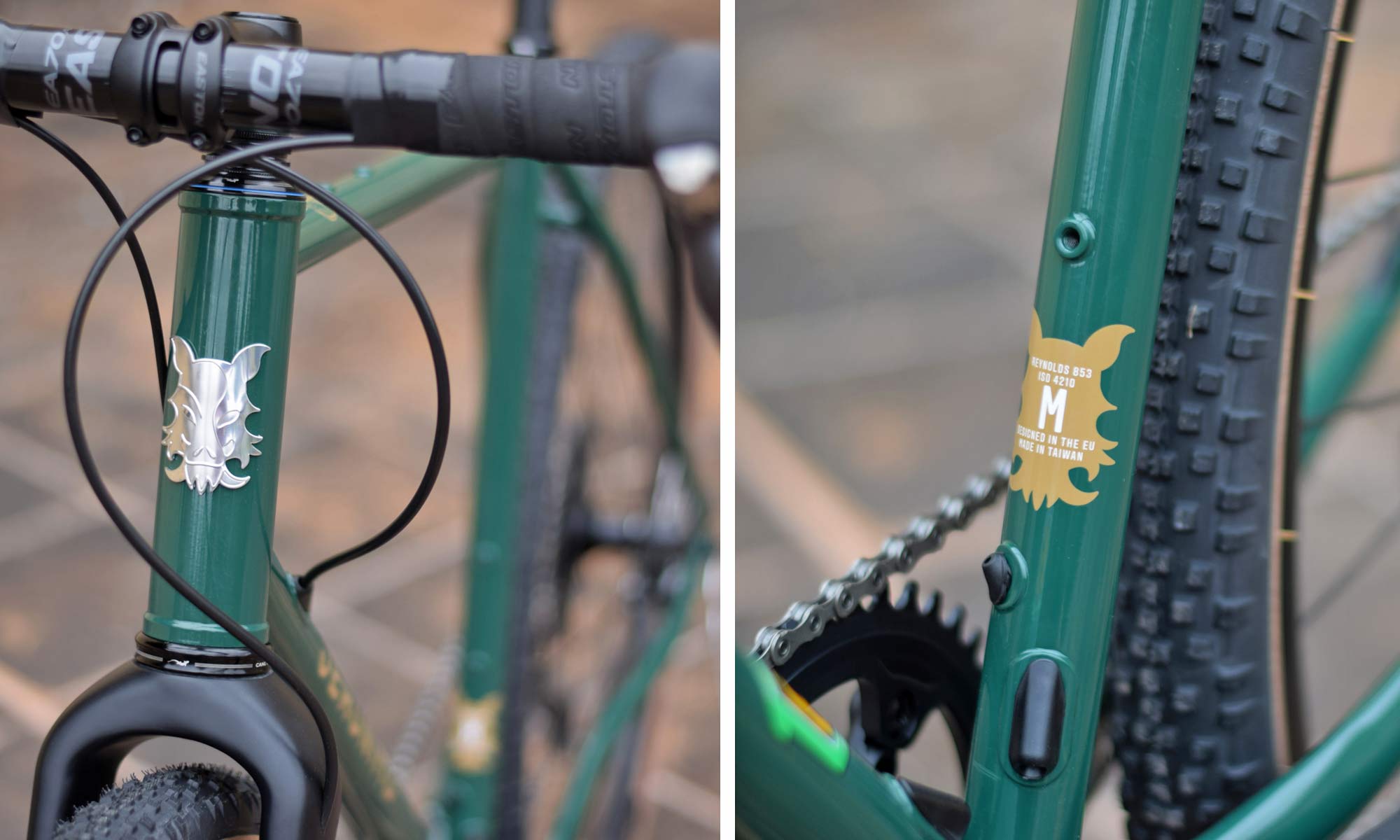 The Sfarrapa gravel frame is 1x or 2x ready thanks to a large chainstay yoke and modular internal cable routing (Di2-ready), including routing for a dropper seatpost. The frame features two sets of bottle bosses inside the main triangle, top tube bag bosses, 3-pack anything cage mounts under the downtube, and 3-pack bosses on its carbon fork, plus rear rack and front & rear full fender mounting. 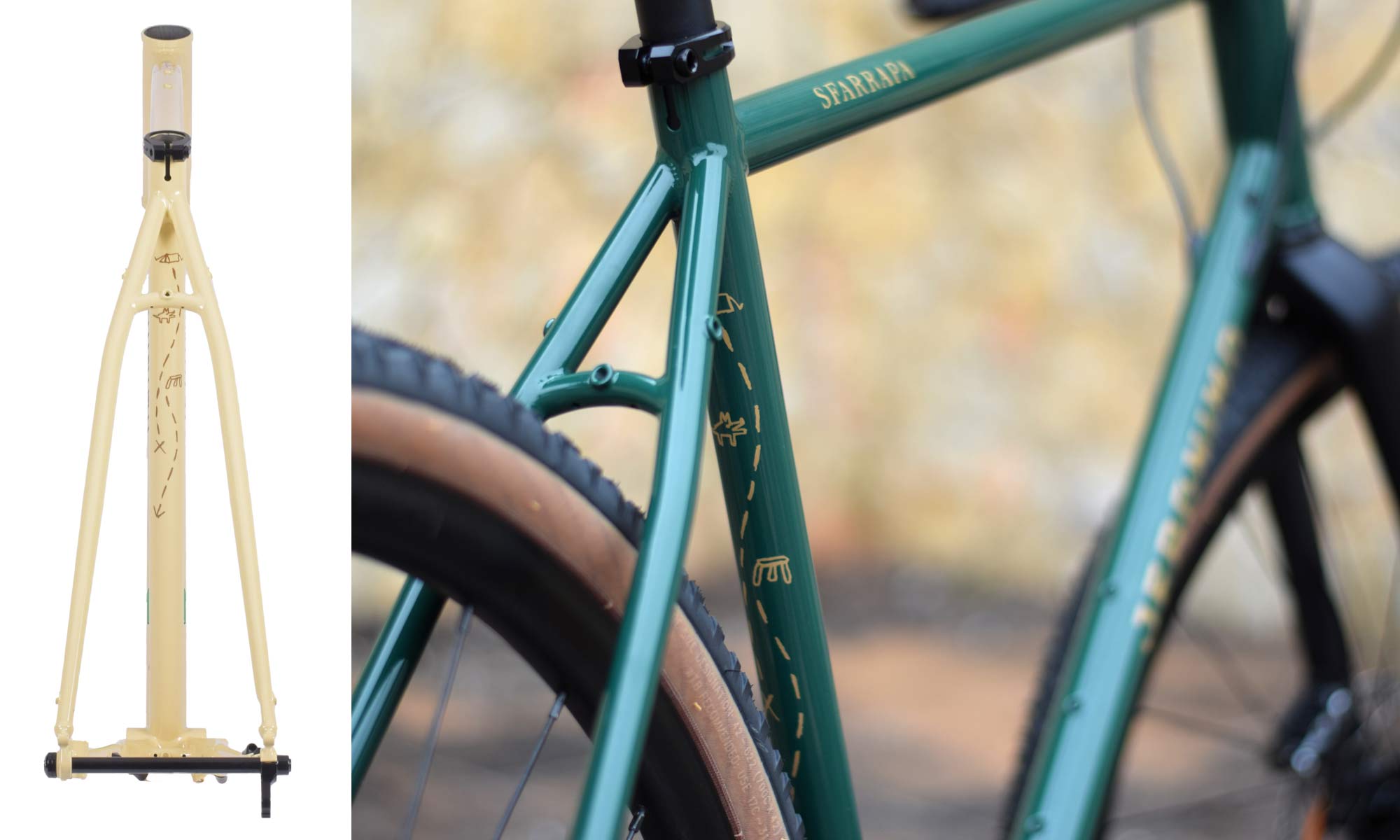 The Sfarrapa was designed for both gravel wheel sizes with clearance for  700c x 50mm or 650b x 2.2″ tires. It gets flat mount disc brakes, 12mm thru-axles with replaceable rear dropouts & hanger, and a conventional external clamp for a 27.2mm seatpost. 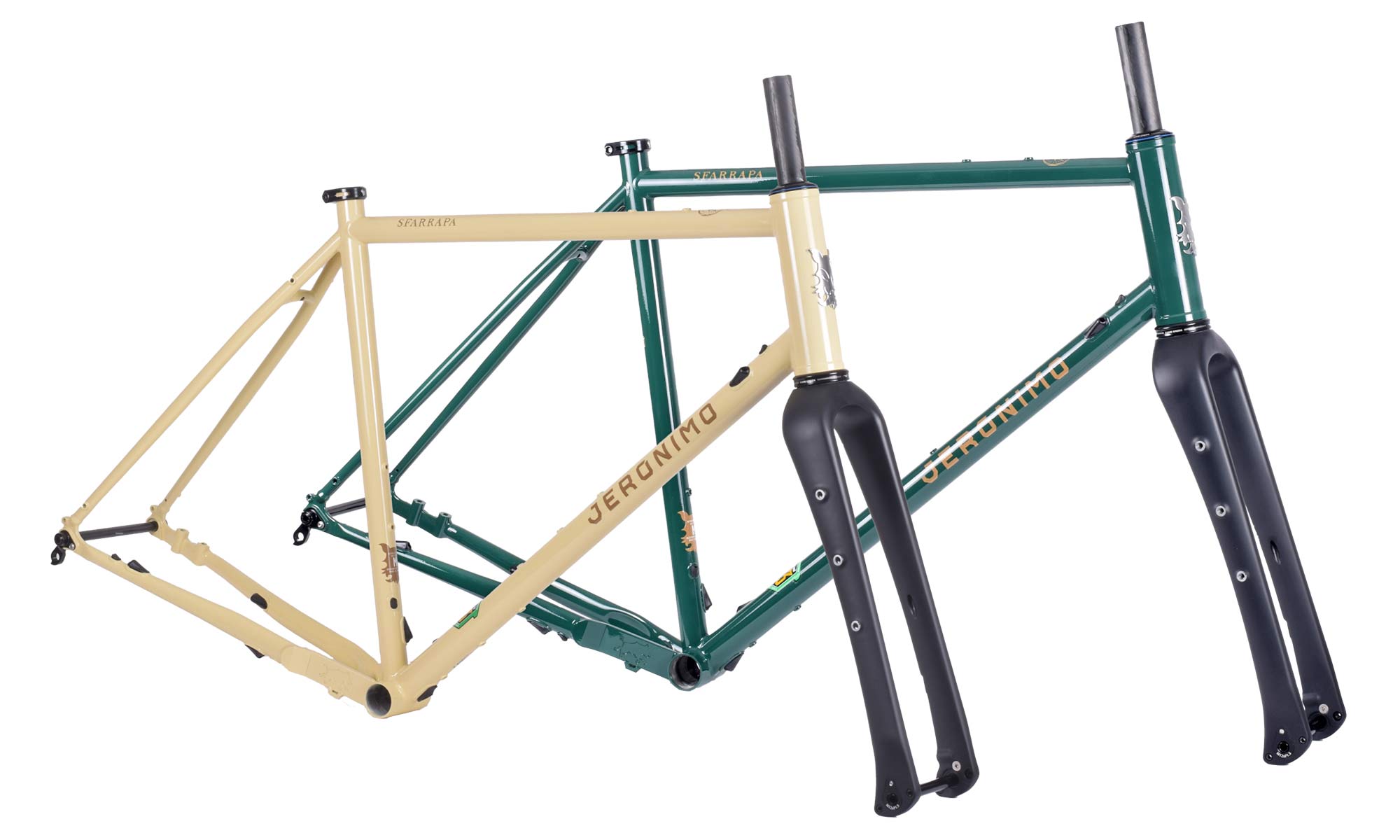 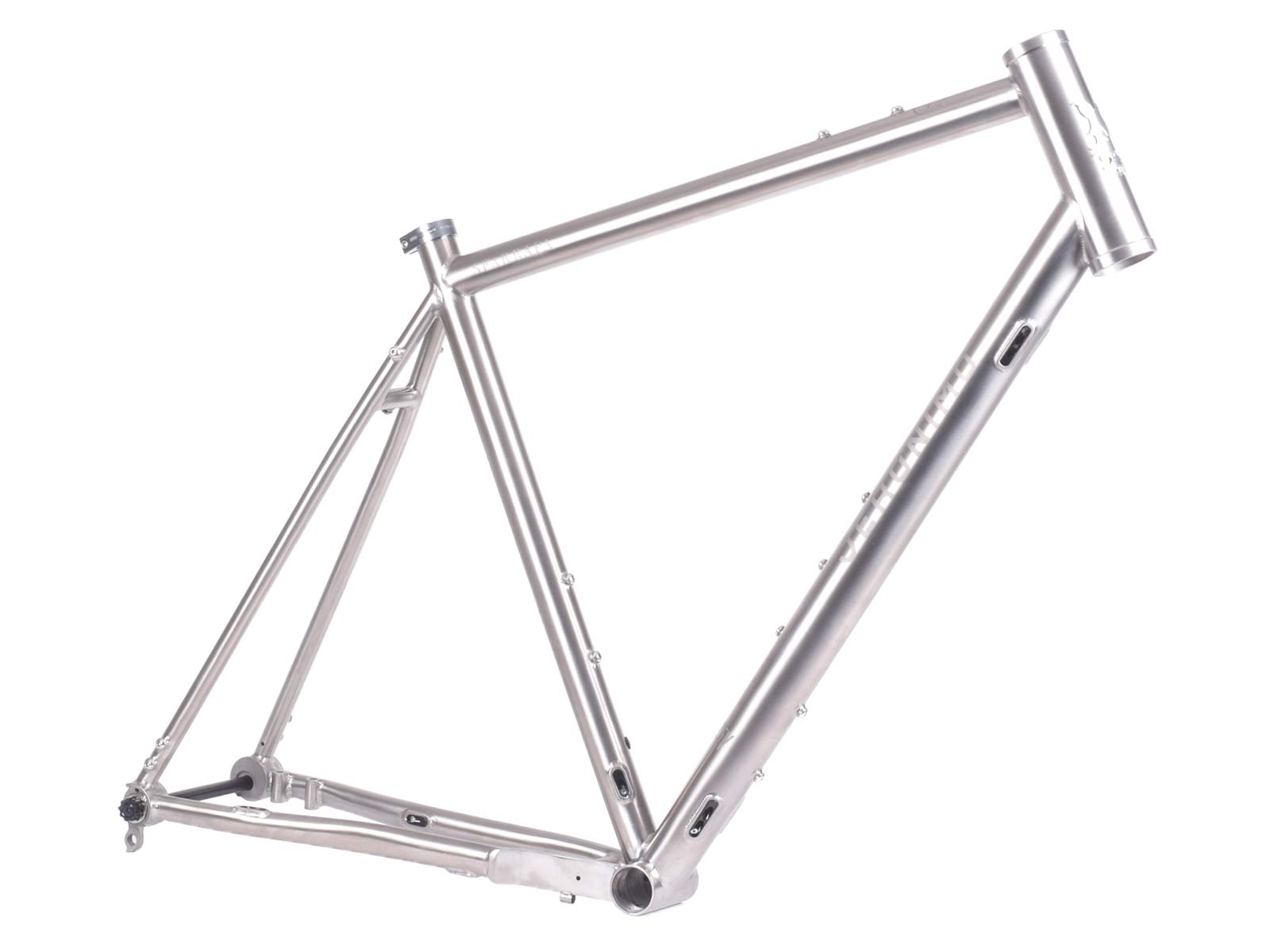 A lighter 1790g 3/2.5 titanium Jeronimo Sfarrapa Ti gravel bike is also offered with all of the same features for 1850€ as a frame-only in stock sizing, or 2000€ with customizable geometry. 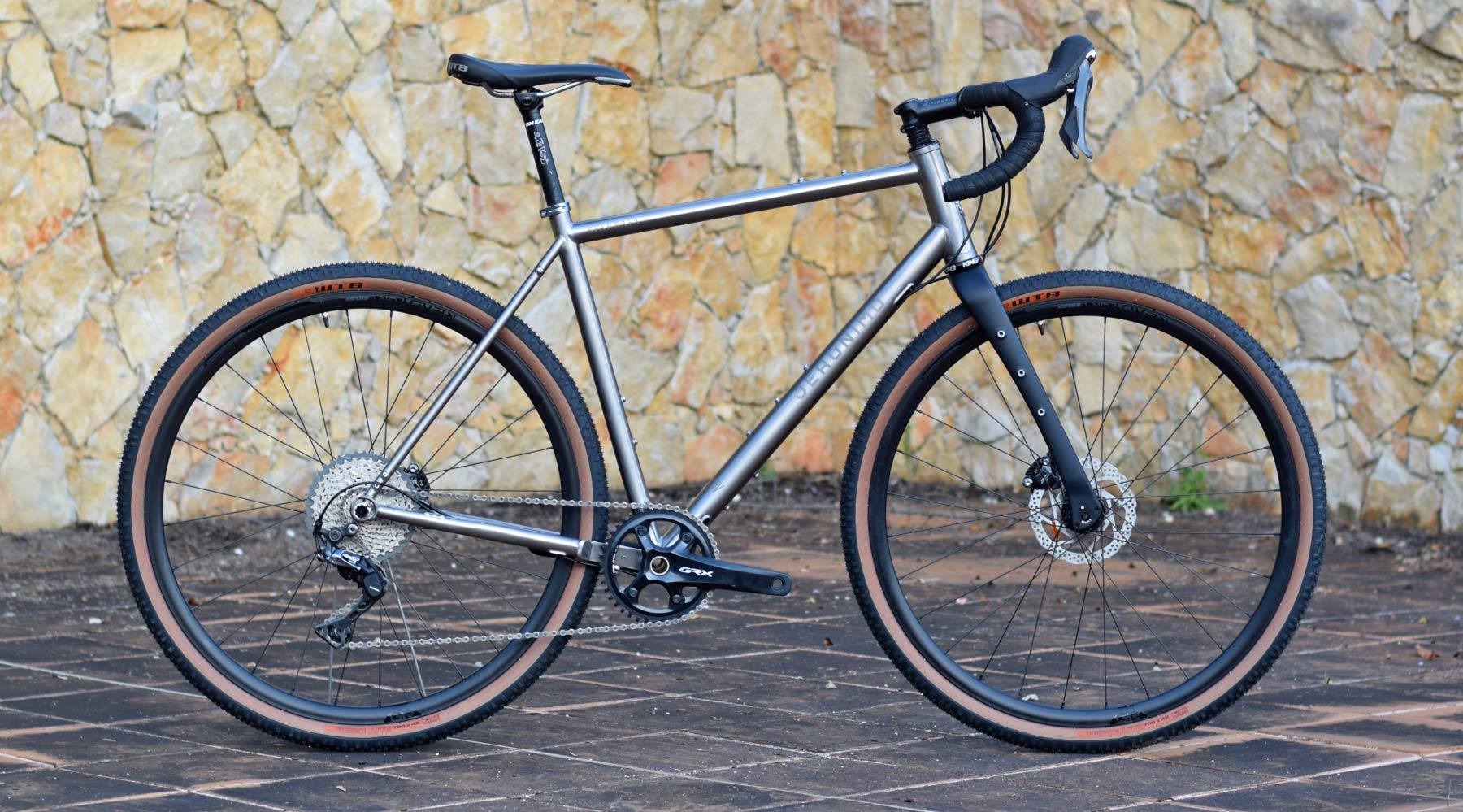 A frame kit including the ti frame, carbon fork & a Chris King headset will sell for 2450€ with stock geo. 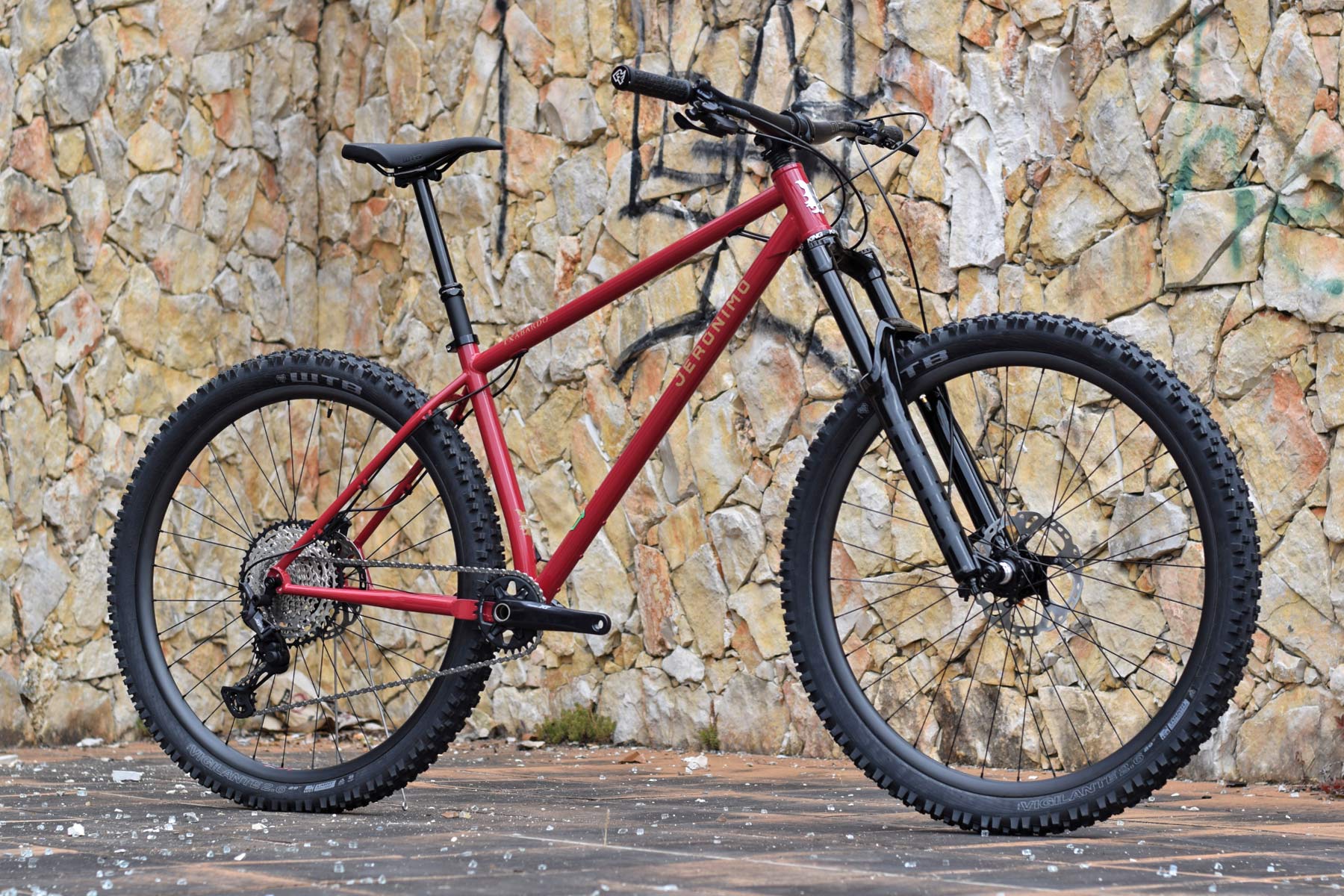 Just like for the gravel bike, for those looking to head further off-road, the Txabardo is Jerónimo’s new do-it-all trail hardtail in steel or titanium. 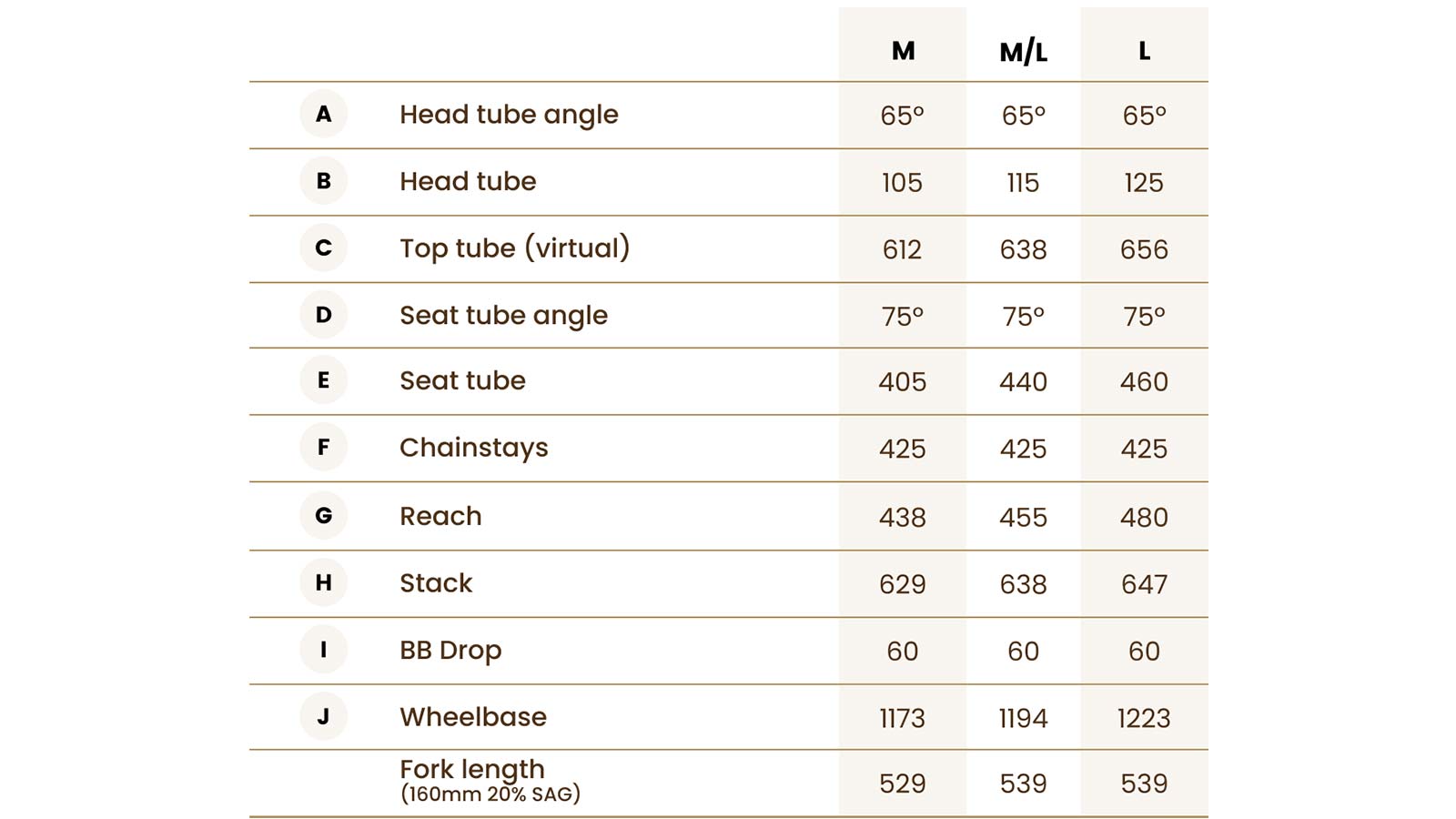 Designed around a 150mm suspension 29er fork, Jeronimo positions the Txabardo as a playful, aggressive trail bike. It gets a slack 65° headtube and long frame reach to descend confidently, and a steep 75° seat angle paired to short 425mm chainstays to climb quickly as well. Jeronimo expects most riders to stick with 150mm fork travel, the trail bike can be also built up with 140mm or 160mm forks, with 44mm offset. 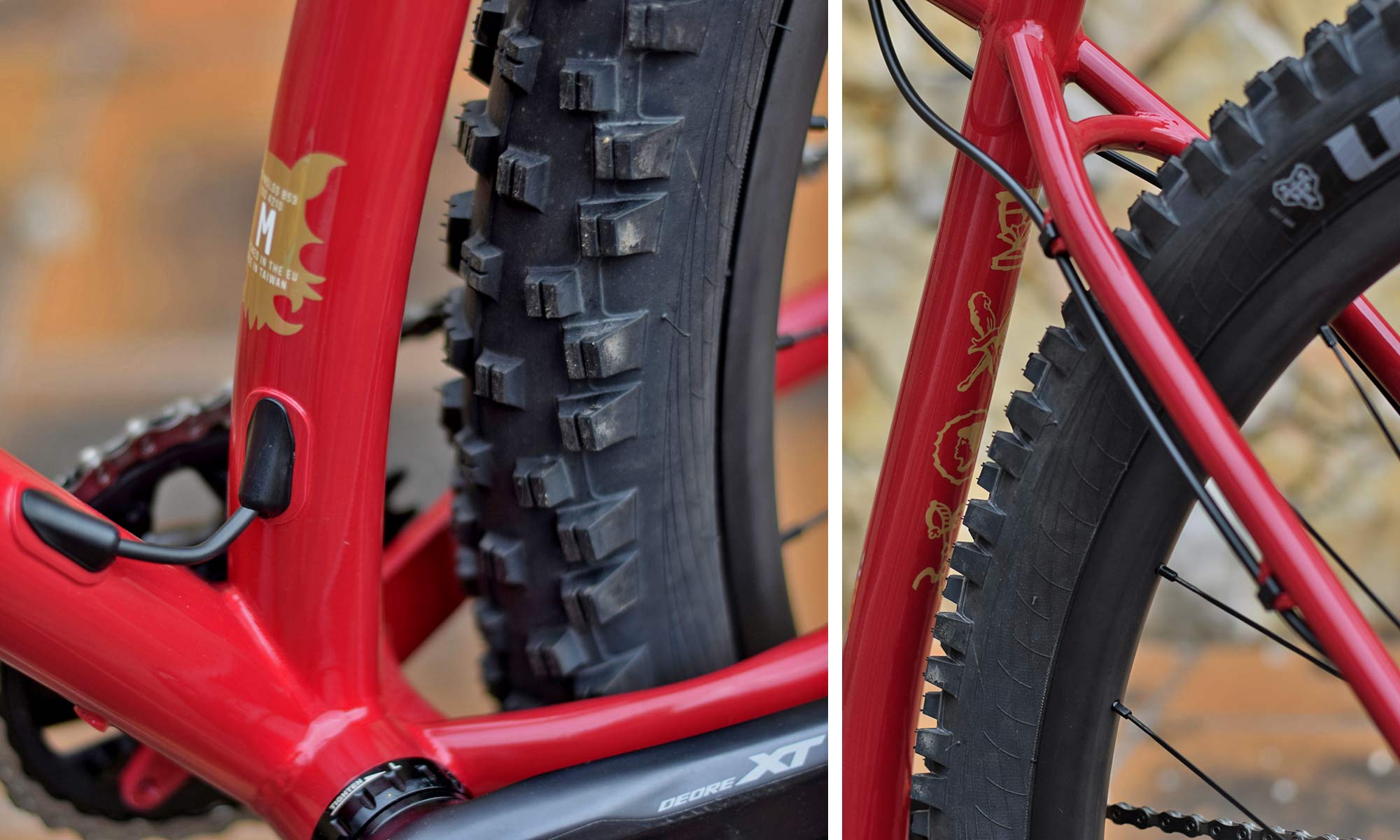 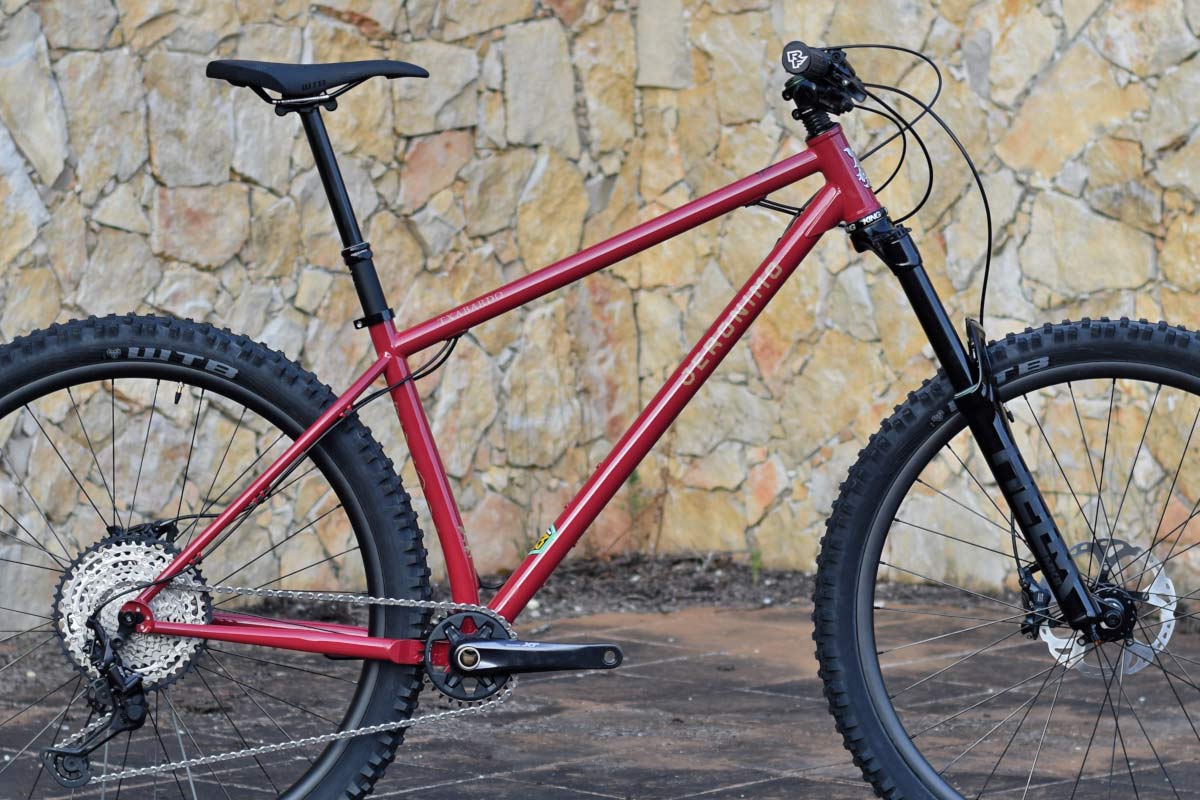 The trail hardtail is also welded in Taiwan from double-butted Reynolds 853 tubing with a straight 44mm headtube reinforced by a downtube gusset, plus a classic BSA threaded bottom bracket and 31.6mm seatpost. Claimed weight for a M/L frame is 2645g. 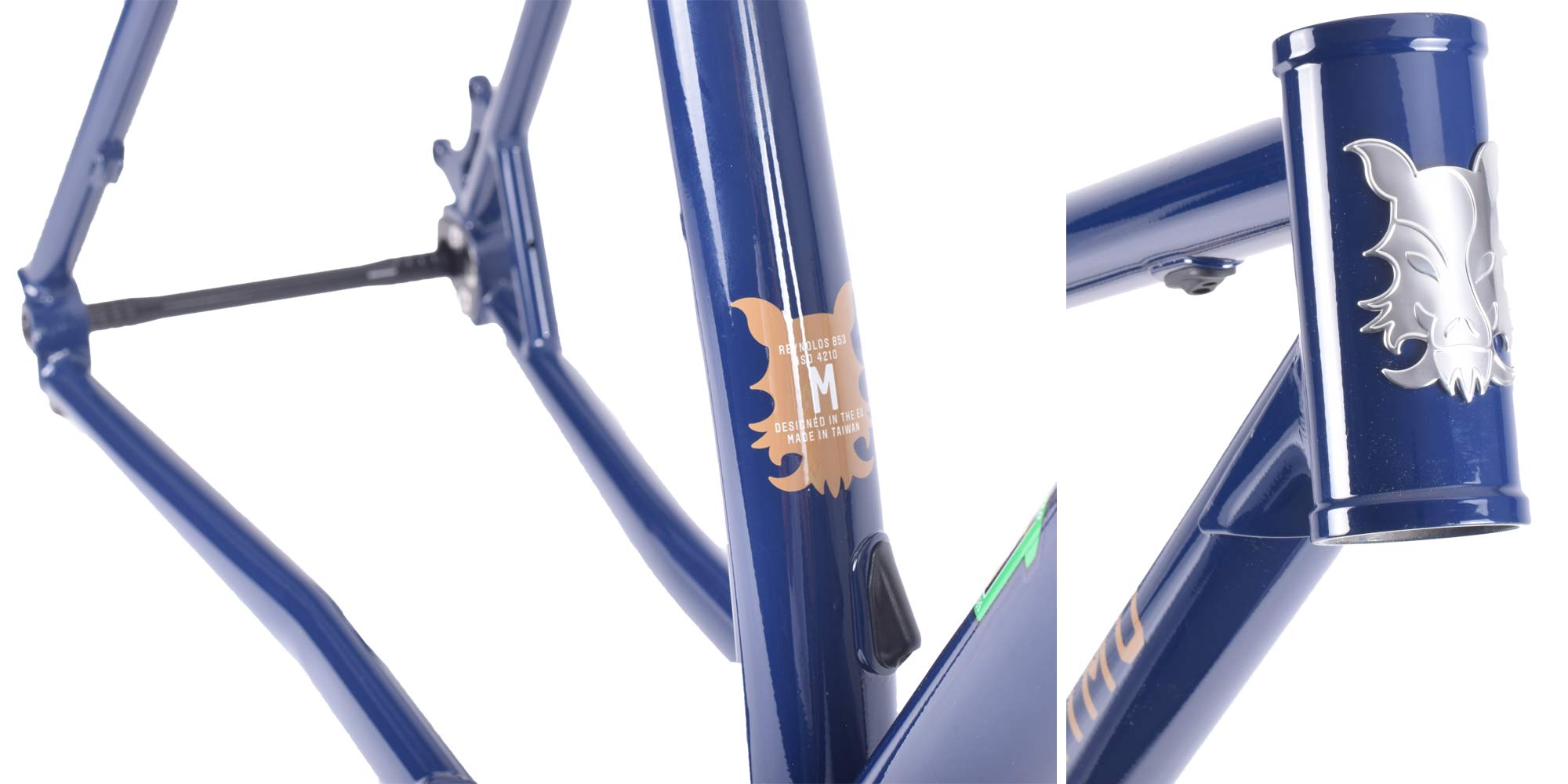 The Txabardo frame is 1x only, features internal routing in the main triangle, also for the stealth dropper post, with Boost rear spacing, ISCG tabs, IS disc brake mount, replaceable rear dropout inserts, and a replaceable derailleur hanger. The trail bike frame gets a regular set of bottle cage bosses on top of the downtube, plus a 3-pack set of anything mounts underneath. 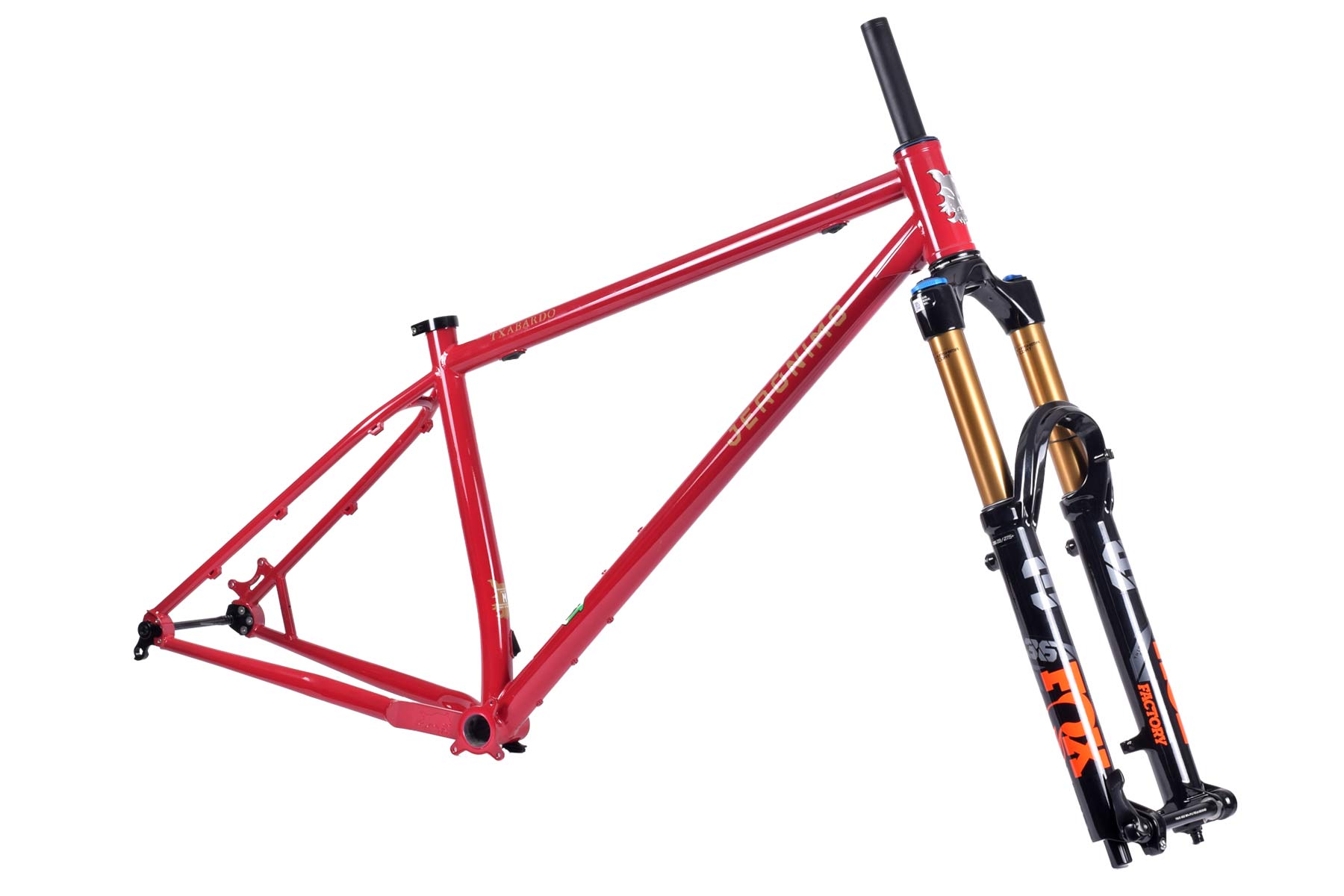 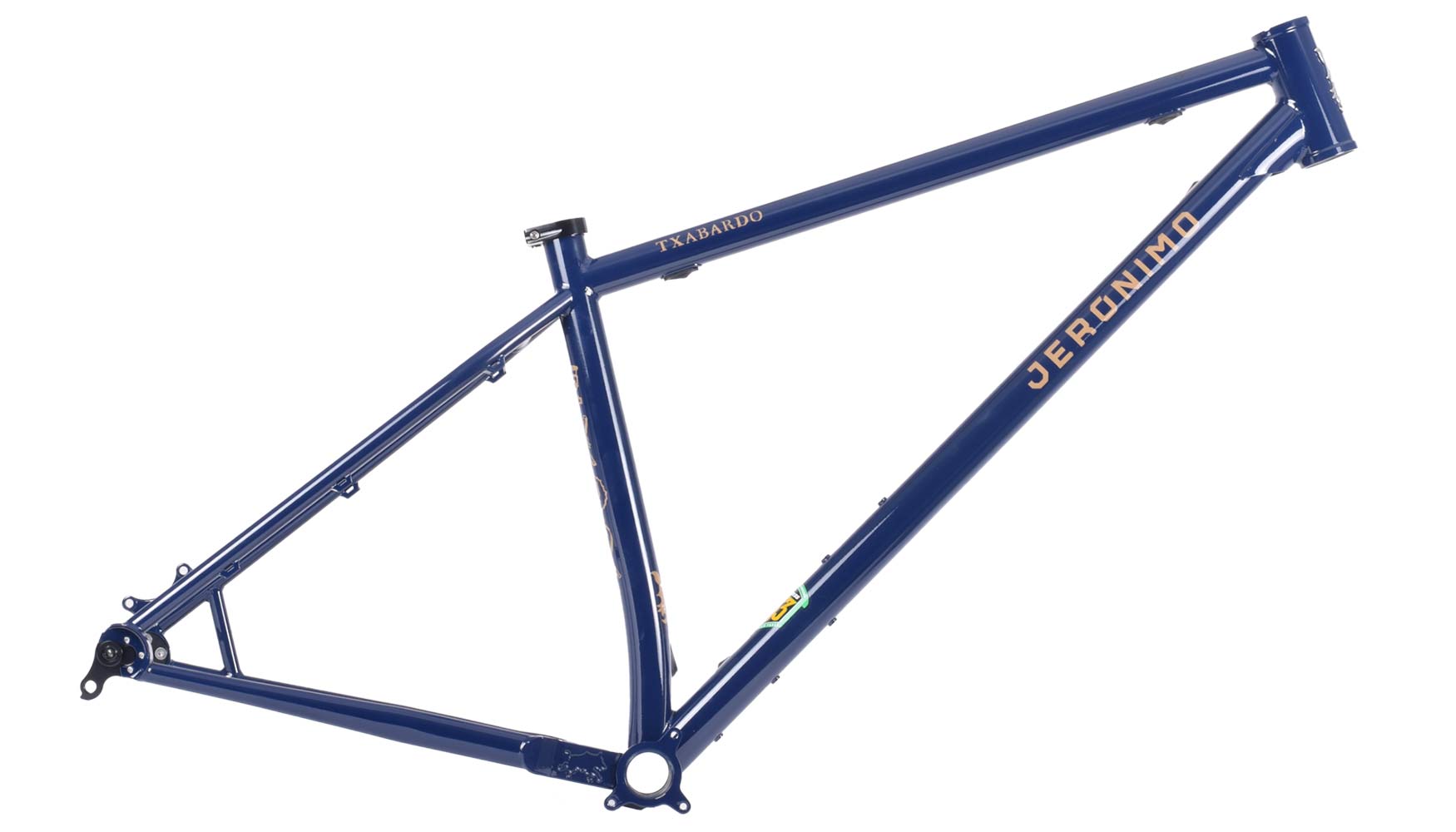 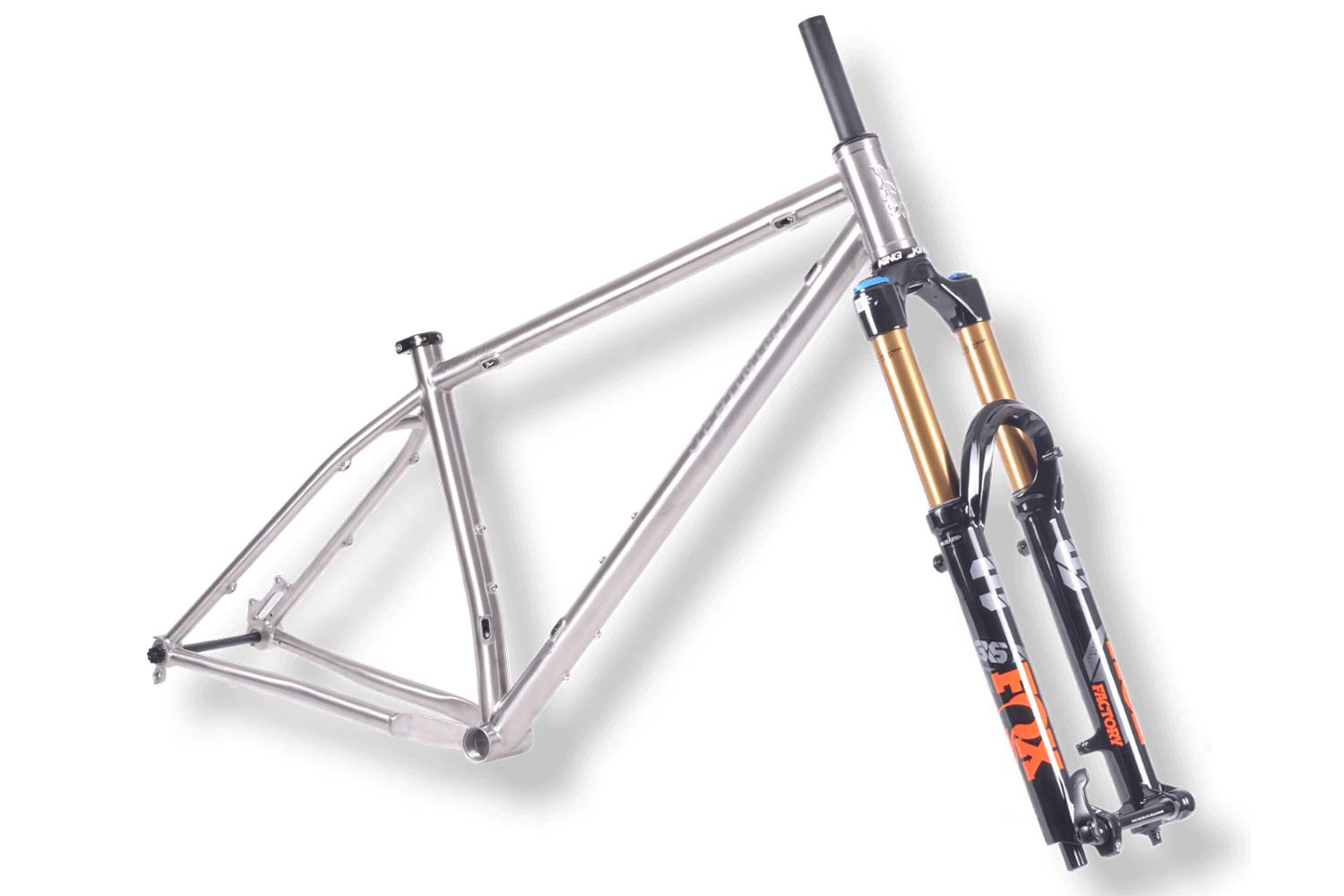 A lighter 1845g 3/2.5 titanium Jeronimo Txabardo Ti hardtail is also offered with all of the same features for 1850€ as a frame-only in stock sizing, or 2000€ with customizable geometry. A frame kit including the ti frame, 150mm Fox 36 29er fork & a Chris King headset will sell for 3200€ with stock geo. 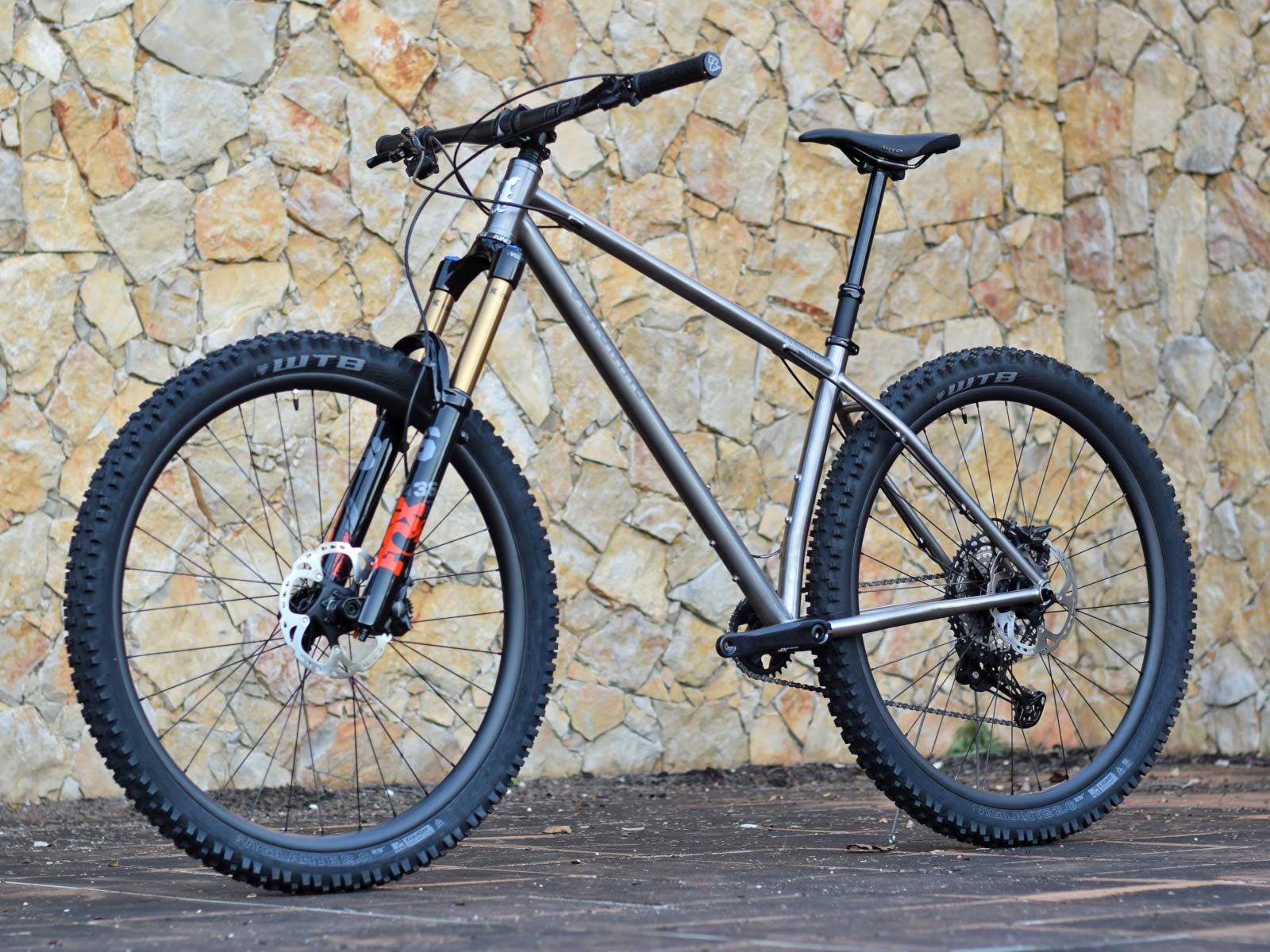 What’s next for Jeronimo Cycles? 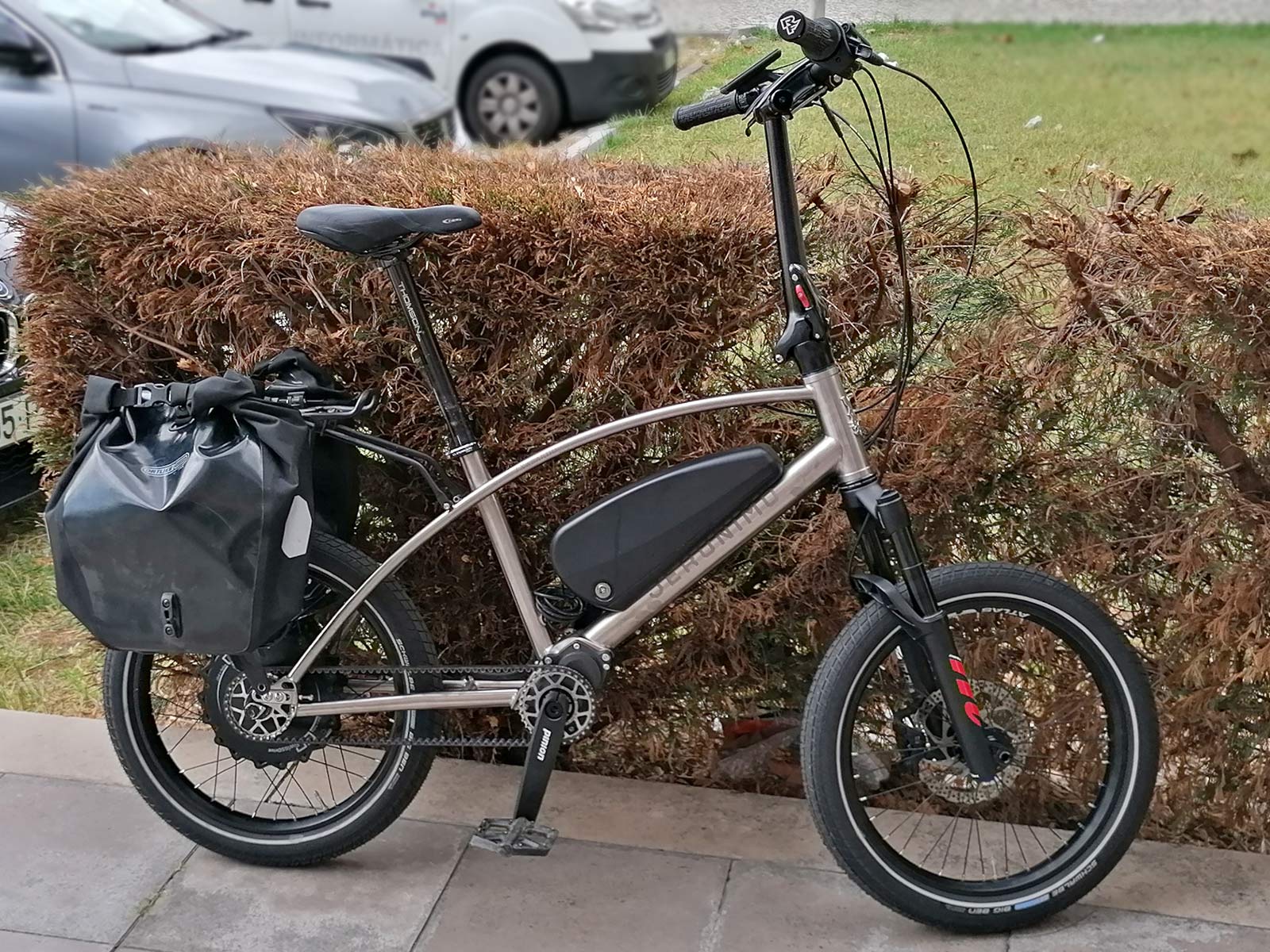 Pedro Jeronimo was clear in describing the revamp of his eponymous bike brand that it was about dialing back to streamline their line-up, while still offering up affordable options since each frame will be available in steel or ti. He hinted that at least a third road-oriented model would be included as well, but didn’t give any more details. What we do know is that he is always full of ideas, so paring back the line-up seems like an effort to keep his imagination in check.

What makes me think that? Well, as much as he’s spent 2021 pruning his lineup, he still shared this prototype 20″ wheeled titanium urban e-bike with a 9-speed Pinion gearbox and an 80mm travel Manitou suspension fork just a couple of months back. So yeah, plenty of unique bikes are always in the works.