The records tumbled as Athing Mu won the battle of the teenagers to take Olympic gold in the women’s 800m in Tokyo on Tuesday.

The American prodigy front ran her way to victory in 1:55.21, the fastest ever by a woman from the US, while fellow 19-year-old Keely Hodgkinson won Great Britain’s first athletics medal of these Games with silver as she broke Dame Kelly Holmes’ long-standing national record with 1:55.88. Those marks also represented the quickest world and European junior marks in history.

Hodgkinson’s compatriot, Jemma Reekie, was narrowly denied a medal by the late charge of Raeyvn Rogers, the American clocking 1:56.81 to the Scot’s 1:56.90 as six of the top seven finishers produced personal best performances. The third British finalist, Alex Bell, ran the race of her life for seventh in 1:57.66.

Mu looked utterly dominant right from the off and took the field through halfway in 57.9, with Jamaican Natoye Goule on her shoulder as the British trio of Reekie, Hodgkinson and Bell were content to sit back in fifth, sixth and seventh place respectively.

The 600m mark was reached in 1:27.2 as Reekie and Hodgkinson began edging their way through the field and it was the former who accelerated first to cut an inside line into second spot, creating space for her compatriot to follow.

As Mu came off the final bend, suddenly she and the British duo had created a gap to the rest of the field. The destination of the gold was clear but who would take the other podium positions?

Timing her finish to perfection has become something of a trademark for Hodgkinson and she did it again, producing a closing 200m of 28.3 to overtake Reekie, who was beginning to pay for her earlier surge and unable to hold her pace.

With victory sealed for Mu, the European indoor champion crossed the line in a time which eclipsed double Olympic champion Holmes’ mark of 1:56.21, which was set seven years before Hodgkinson was even born.

Rogers had been seventh entering the final 100m but covered the closing distance in 14.0 compared to Reekie’s 15.3 to settle the medal winners.

“It’s awesome,” said Mu, who became the first American to win the event since 1968. “I feel like I’ve just accomplished one of my goals. I just wanted to be a medallist. I wasn’t really putting gold on that, but as it got closer to the final today, I was like, ‘Yeah, we want gold’.

“It’s an accomplishment that I wanted off my list. I am just happy, blessed and excited to be here and took care of this experience as well as I could.

“I wanted to go early from the front and not let anyone mess up my race plan. I just wanted to do my own thing. It’s exactly what I have been doing in all my races. I just go out there and run. Whatever comes is going to come and I’m just going to go with them.” 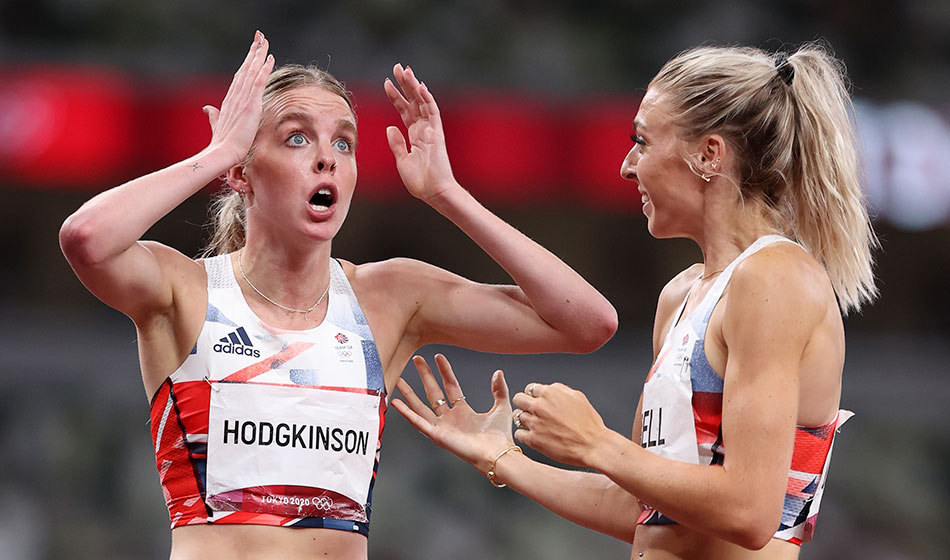 For Hodgkinson, her performance caps what has been an astonishing year which saw her break the world indoor record in January, land the European indoor title in March and the retain her British senior title in June. Not so long ago she had considered the European U20 Championships as her main target for 2021.

The Leigh Harrier, who is guided by Trevor Painter and for European Indoor 800m champion Jenny Meadows, revealed she had been inspired by some pre-race messages from her predecessor as British record-holder.

“I’m pretty speechless right now,” said Hodgkinson. “That record has stood since ’95, Kelly is a massive legend of the sport and always will be with that double Olympic gold. She sent us all a few messages the last couple of days and has been so supportive, so I’m quite in shock about that time but I couldn’t be happier really. I really executed that well.

“She put a lot of belief in me and it’s nice to have someone like her, who believes in me like that, because she’s amazing, as well as people in my support team, Jenny and Trevor. I couldn’t have asked for better people to support me. It’s really been a crazy nine months, but I’ve enjoyed every second of it.

“The whole thing is cloud nine really. From the European indoors to breaking some records to now, the biggest stage in the world, still a junior, it’s absolutely crazy. There’s not just one 19-year-old in the race, there’s two, which is unbelievable! But hopefully it stems a good, competitive 10-15 years ahead, and even faster times on the horizon.”

Reekie couldn’t hide her disappointment and not managing to hold on to a medal position. “I definitely wanted a lot better than that,” she said. “The time was good but I know that I’m in even better shape than that and it’s just frustrating when you don’t perform on the big stage because I’ve been flying in training and everything else, but I’ll learn from it and come back stronger.

“I didn’t quite get out as fast as I wanted to and into the position I wanted to, but that’s 800m racing, it’s always going to be really tough, and the girls have done so well out there today.

“I’m not going to be that happy about it, but there’s nothing I can do about it now and I can’t reverse time, I can just progress and get better for next year.”