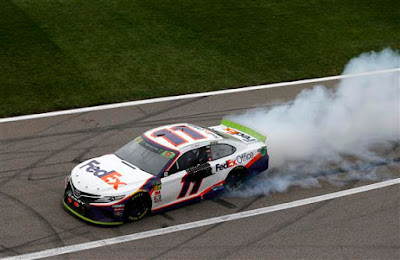 New Hampshire Recap: The race started under damp conditions, and misty rains picked up quickly in the first few laps. Fresh tires on wet pavement led to three Joe Gibbs Racing drivers, including Hamlin, getting sideways on Lap 6. The FedEx Office Camry suffered minor damage resulting from contact during the slide, and the team was pushed back to 17th. NASCAR then put out the red flag to wait out the rainy conditions. After an hour-and-40-minute delay, the race resumed with the #11 no worse for the wear. The car was still fast, and Hamlin started making his way to the front. The FedEx Racing pit crew was speedy, too, gaining Hamlin spots on pit road twice during Stage 2. The team stayed in the top five, including leading a lap, throughout the segment. But during the team’s stage-break pit stop, a lug nut became lodged behind the left front wheel as the crew changed tires. As Hamlin took off from his pit box, he instantly felt the wheel was loose and was forced to return to pit road the following lap. The tire-changing mishap pushed him back to 26th, but he used the remaining laps in Stage 3 to battle back to a 10th-place finish.

Watkins Glen Preview: The NASCAR Cup Series is back after two weeks off and is headed to the New York Finger Lakes for road course racing at Watkins Glen International. This will be the first race at the track in two years and Hamlin’s 15th career race at the track. In those 14 previous races, he’s won once while finishing in the top five four times and the top 10 seven times.

The series hasn’t raced at Watkins Glen in two years. How difficult an adjustment will it be to go back and be ready?

“We’ll prepare for it just like we do with all the other road courses, where all the drivers will get in the simulators and get acclimated to it pretty quickly. But Cup drivers are so good at being presented with a challenge and stepping up and being extremely good at it. I expect some of the first laps of the race will be some of the fastest laps of the race because these guys are so tuned in. Although it will be different because it has been two years, for most drivers who have been doing it for 10-plus years, it will be a quick adjustment.”

How do you feel about coming back to racing after a couple of weeks off?

“It’s definitely different to get a break like this, but I think it was good for everybody, especially the team guys, to get that break. But now it’s time to get back to business. I’m confident we’ll bring a fast car to The Glen, so we just have to go out there and execute.”

FedEx Express Along for the Ride at Watkins Glen: The NASCAR Cup Series will make its visit to Watkins Glen International on Sunday, and the FedEx Express station JGXA in the LA Empire District is going Along for the Ride. JGXA was the first station to deliver the COVID-19 vaccine in the PACWEST and has delivered the most vaccines of any station in the LA Empire District. FedEx Express is proud to recognize the 325 employees at JGXA for their dedication and commitment to their customers and the community.